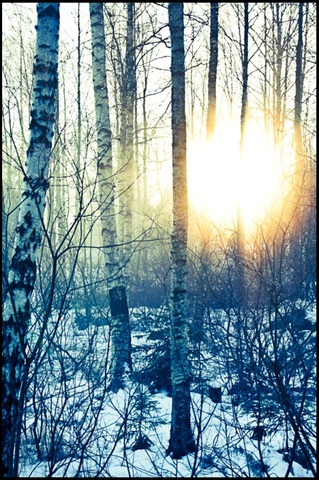 Yesterday, I had lunch with a new friend and her four-year-old niece. The little girl spoke no English, with a couple of pleasant exceptions. "Okay." "Gimme five." "Yo dude."

"Makes sense," I said, sipping my peppermint mocha. "She's spending so much time with a California girl."

"Believe it or not, that wasn't me. My Norwegian sister-in-law actually taught her that one."

While we adults talked, the little one played and played. A toy tube of fake lipstick kept her occupied for a few minutes. Eventually the separate plastic pieces skittered across the floor. Then she scribbled and sketched on a paper placemat. Then she crawled under the table and proceeded to "hide" from us for a while, shrieking with delighted terror when we "found" her.

After a while, though, she'd had enough of our all-English conversation, our low-and-steady adult voices, and she popped up like a gopher, grabbing for the delicate white and black patterned infinity scarf around my friend's neck.

The brain of any child is a mystery to me, but I enjoyed watching her take this scarf through its paces. From one moment to the next the scarf was a hat, a blanket, a hammock, the veil of a spøkelse (ghost). Her voice warbled through the fabric, a haunting howl. When the ghost-game was done (in a matter of less than two minutes), she demanded a dress from her aunt. My friend proceeded to wrap the scarf around the child's tiny waist, covering her red Helly Hansen snow bibs, and then tied and tucked the remaining end, pulling her hands away to reveal a makeshift dress.

The little girl stared down at her new garment in wonder, twisting her head far around both sides to examine it, making sure it was a true dress, that no part of her was left exposed. Determining herself truly elegant, she drew back and hurled herself into her aunt's lap, wrapping her slender arms around my friend's neck. Grateful.
I met my friend's eye. It went without saying that we two California girls shared that important part of childhood. Make-believe. Dress-up. We both did that, in our own corners of the state. And here, in a far-flung corner of the world, another little girl was doing the same.

In the blink of an eye, she stepped back again, looking at us both. Static electricity slicked her wispy blond bangs down into her eyes. My friend reached over and swept them up and out of her face.

"What I love is that the word for bangs here is pannelugg , which translates literally to forelock. Horses have them, too."

Her niece, suspecting that our conversation was about to travel away from her again, put her hands on her gracefully-skirted hips and asked her aunt a question.

Satisfied, the little girl turned to me. Now it was my turn to render a verdict. Her serious, blue-green eyes under starry blond lashes made it clear that only one answer would do.

My friend nodded. "Yes. But they use fint in the same way. ' Du er så fint ' translates to 'You are so fine.' They just use the grandest definition of fine."

I thought about this for a moment. Suddenly I was picturing young Will Smith, The Fresh Prince of Bel-Air. Any doubt I had that my new friend and I shared an important bond was gone a minute later.

Laughing and almost in unison: "Girl, you're so fiiiiiine ."

This is what I like best about expat life. Every interaction plies the mind. Almost daily I am reminded that humanness is something simple and very universal. And because I am foreign, bonding with another foreigner is as easy as a mug of cocoa, a game of make-believe, and memories.

Meanwhile, the little girl had changed her game again. The scarf was no longer a dress but a bag to be filled with items, packed as a gift.