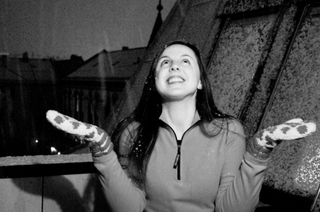 A predictable post, I suppose, considering that I'm a California girl at the commencement of her first winter in Norway.

For California kids, certain Christmas songs and lore carry a different kind of mystique. Not only Irving Berlin's White Christmas , but also Jingle Bells , Winter Wonderland , and Frosty the Snowman . We don't understand these things. That is, unless our parents dragged us to the house of a relative who was fortunate enough to live someplace where it snowed. While my Illinois cousins spent the afternoon of Christmas Day throwing snowballs and sledding, my brothers and I were out rollerskating on sunny sidewalks through our neighborhood. Without coats on. And while my cousins might have debated the point, I still say we were the ones who drew the short straw.

So, you can understand my excitement when, after the warmest November Norway has on record, big, fat flakes of white began falling damply and intermittently from the evening sky.
I ran out onto the patio to see. They melted on contact with the patio floor, melted in my hair. And raindrops fell at the same time. Disappointed, we shrugged it off and went back inside. Watched The Colbert Report . Ate pepperkaker . Jonathan educated me about the concept of Black Holes in space (because they freak me out, and I asked).

Then the snow really began. It accumulated on our slanted windows, reflecting the fluorescent lights over the kitchen stove, glowing white against the black night sky.

We jumped up again and opened the door to our patio, now covered with a healthy layer of white. We pulled on shoes and stepped out into it. I found myself taking tiny, purposeful steps, trying not to mar the immaculate surface any more than I had to. There was no longer any rain, just snow. Lots of it. Descending quickly, appearing heavier than I would have expected.

This time it caught in my hair and stayed. I could study individual flakes on the sleeve of my fleece pullover. Jonathan snapped a few pictures. Then we called the kitties. 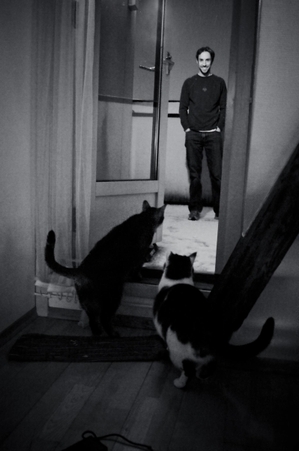 Already Disney was curious about what we were doing outside. He peered through the bottom of the glass patio door. Anxious. Interested. We pulled the door wide open and I stepped back inside with the camera while Jonathan called for them. Neither cat wanted to go out in the snow. They propped themselves up on the dry inner door frame and stared out.

When calling their names didn't work, Jon tried another tact.

It was a dirty trick. The kitties wanted their dinner, and over the years we've trained them to respond to the word. They come running, furry bellies swaying, when we call it out. Morning or night. Crypto will mew a certain way, trying to coax us to pull the food container from the cabinet faster. And now, Jonathan stood at the far side of the snowy porch saying the magic word.

Disney took the first step out. His second front paw hovered over the snow, refusing to drop into the wet, white layer. Crypto did the same. Flakes fell and stuck in their whiskers. The jig was up.

It's possible that all of this will melt by morning. That we won't have another good snow for a week or two. But I feel pretty confident that our Christmas will be a white one. Our neighborhood is quiet under its new blanket. The street is brighter than usual because the streetlamps are reflecting off the snow and back up toward the sky. It is quiet. And the snow continues to fall.