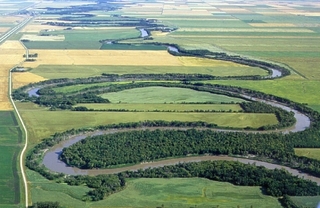 In the poem Fire and Ice by Robert Frost, the speaker presents two schools of thought regarding the end of the world:

SOME say the world will end in fire,
Some say in ice.
From what I've tasted of desire
I hold with those who favor fire.
But if it had to perish twice,
I think I know enough of hate
To know that for destruction ice
Is also great
And would suffice.

The point of the poem, however, does not lie in either side of the argument. The speaker claims to "hold with those who favor fire," but his reasoning is not at issue, is not outlined for the reader to consider. Rather, the point of the poem lies in the irony of the truth behind the topic of discussion... that regardless of who is right about the way the world WILL end, either way WOULD work, and no matter how it is debated beforehand, no matter who believes what, when it happens, the world will be finished. And the weight of that fact rather than the validity of either theory is what people should consider.

Robert Frost is mocking me. I learned this poem in sixth grade, and never could forget the biting irony behind it. But I love debate. I love a good mental tug-o-war...

This is why I continue my dialogue about God and His current role in our lives with my dear friend ( Meandering - Volume I , Meandering - Volume II ). It is why I look forward to her reactions to my contentions. It's healthy. In the end, though, what we debate is not foundational, is not revolutionary, is not "salvational." In the end, we're really on the same team. This is my counterpoint. (Her points are in bold, and my responses follow.)

God is love in the Old Testament and the New Testament... The latter half of the Old Testament is all about God's relationship with Israel and how He is dealing with their disobedience. (sidenote: the words "disobedience" and "obedience" imply a choice on the behalf of people. Otherwise it would not be obedience we would be functioning as robots, mindless zombies, etc.)

Your point about the words 'disobedience' and 'obedience' is quite valid. Both imply choice. The existence of both in the Bible implies that people chose to follow God's instructions or chose to stray. Here's my issue with your reading of obedience in Biblical context.... You're applying a human take on the definition of 'obedience' and its antithesis to something Biblical.

Remember that none of us has the capacity to achieve righteousness through our behavior, our actions, or our obedience. Even when we "obey," we're still sinful and deserve death and nothing more. So, Biblical definitions of obedience, in my opinion, do not necessarily tie-in with free will. We live in a context which, for all intents and purposes, allows us to believe we have free will, but when we "obey" God, we're really only furthering His purpose, whether that means fulfilling the Great Commission, or barricading our hearts against the "present evil age" (Galatians), or merely providing Him with increased pleasure. And no matter what is accomplished by our obedience, it works for the good He set forth long ago.

No, I don't equate us to robots or zombies. Rather, I think we may be more like chess pieces, but chess pieces who live lives which can appear to be personally fulfilling and inside our control even as we're furthering the playing out of His overarching game.


The God I see in the Old Testament is one who loves his people so much. They are worshipping other gods, they live in complete sin with no guilt, they continually turn their backs on Him. What else is it but love that would cause God to plead with his people through prophets to change their ways? What else is it but love for God to, instead of smiting the people who are ungrateful as he says he is going to, deliver them from the punishment He declares against them?

What else indeed? For God so loved the world... He created it, He created us to exist in and over it, He spared us in the face of original sin and all subsequent sin, He gave us options throughout our sinful histories to continue to access His grace, He tried over and over and over again to get us to hear Him, to understand that He was and is the only way to righteousness and an eternity in Heaven. God did all of those things because of love.

And sometimes He punished the world, too, and I'm not arguing that a loving God would not have done such a thing. He would. He did. It does not detract from His love in my mind because we deserved that flood, we deserved every bad thing. He never stopped loving us. And, as you'll read in my arguments later on, I don't believe those people who were washed off the face of the earth were necessarily lost for eternity, either. I'm simply open to the idea that the God I believe in wields a love more powerful than anything I've been taught in Sunday school.

People often trivialize a miscommunication by passing it off as "pure semantics," but it's important to note that the word semantics comes from the Greek word for significance. Using the right word is always best. Using the right word precisely is better. The latter allows less room for doubt. When you're debating, your real victory comes not via your opponent's loss, but via your opposition's understanding and revelation. No intelligent person enters an argument without believing he or she is right to begin with, but a wise person is fighting for enlightenment, both her own and that of her opposition.

Justice may mean getting what you deserve, but Vengeance means that, also. And in the case of God, to whom the wages of sin equates to eternal damnation, His version of Justice in the Old Testament reads as our version of Vengeance in any other context.

The God of the Old Testament was Merciful, too, I'll grant you. He emancipated the Israelites and blessed a select few with oodles of children and grandchildren, even when those individuals strayed or tried to speed up His process before it was time (again, an example that the plan He put into place runs at His own pace, not ours). But God's Vengeance is more memorable. He stripped the world of its inhabitants to prove a point, and that point stands. He wouldn't want us to forget His flood in favor of remembering only His constancy to Israel, which is exactly why His vengeance appears in the Scripture.

I don't believe God changes His character. I believe His character is outside of the bounds of our minimal understanding of character. We ascribe human qualities to Him and spend hours interpreting (and, arguably, misinterpreting) His word. We are the limiting, changeable factor in the grand equation.


Herein lays the dilemma. I don't think that God knowing everything and deciding everything are the same thing. Just because God knows what we are going to do does not mean that we aren't choosing it... You also forget that in the case of Ninevah, they actually had to decide/choose to turn from their lifestyle and repent. THEN God chose to spare them .

We are a people based in and dependent upon our own chronology. First. Then. Next. Finally. These are the words we use to order ourselves, to order the moments of our lives. But God is outside of Time. What you and I read as Cause (God threatens Ninevah with destruction) and Effect (Nineveh repents), He saw and knew. He conceived it all at once. There was no learning curve.

Consider this... what if God's sending Jonah to Nineveh had less to do with Nineveh and more to do with Jonah? As with the parables Jesus would later tell His disciples in order to teach them basic truths, God taught Jonah about Mercy and Righteousness and Obedience in a timeless story which has been taught to millions of people in the millennia since. So, consider this... perhaps the story of Jonah was a situation crafted for him as an individual, and was meant to be a lesson for you and me and all the people who have learned from it since its telling.


I also don't want to rule out the possibility of God limiting himself in order that we might have free will. God limited himself to the form of a man; was that the one and only time God can/will limit himself? I don't think so.

Jon would smile at this point. He's brought me back to this idea time and again. It is impossible to limit God. Yet, for God, nothing is impossible. And so He limited Himself, though I wouldn't point to Jesus as evidence of that. Jesus was still God. Not exercising one's power isn't the same as limiting one's power. Only if Jesus had been unable to perform miracles would He have been limited. He did not use his emergency brake, and so He experienced life on our terms. But the only time I believe God limited Himself was at the crucifixion. Jesus cried out to His Father, and He was forsaken. That was limiting. That was necessary.

Could He limit himself again or otherwise? Certainly.

Let the record show that YOU were the one to call out part of the Word as potential "crap." It was not me. Haha. This should be a struggle, especially considering the way Christians are taught. We are given a sense of absolute entitlement. We are chosen and will live for eternity with God and Jesus on streets paved with gold. Awesome.

The truth is that if we take the Biblical stance on the future of the world, about judgment and Armageddon and Heaven, Jesus did only die for a select few... the ones who chose Him, and choose Him, and will choose Him. You struggle with the idea that the "select few" could have been preordained to end up in Hell. Shouldn't we struggle with the idea that anyone ends up there... whether or not that choice was made long before hand?

Sometimes I wonder how most Christians would feel if, when we die, we discover that God has decided to interpret those verses about love for the world even more broadly than we'd hoped (or preached). What if everyone still makes it to Heaven, regardless of choice, regardless of wrongs? What if everyone is forgiven and welcomed and blessed with eternity in a sinless, selfless parallel universe called Heaven? What if His Mercy actually extends further than any of us can possibly understand?

Fire or ice? Interestingly, our debate is actually tinged with a concern for the fate of the world. That's as it should be, if you ask me. Concern for our fellow man is a hallmark of our humanity, and I believe most of us are affected by it regularly. Wherever these arguments and/or open-ended questions lead, we're learning, we're preparing, and we're the better for them all.