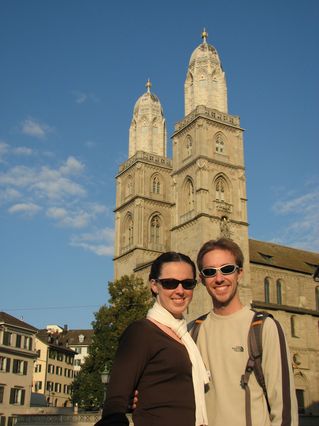 Drops of perspiration trembled along my jawline, clustering defensively in the face of gravity, and then splashed onto my bare, pumping thighs. We have a 'new' exercise bike, gifted to us by a friend who has acquired truly new exercise equipment and needed the space. The bike sits in our loft, three feet from our giant television. From the seat, I can watch a full version of Friends while "biking" eight miles. It's new. It's not something I ever pictured myself doing in this house. But little in my life looks the way I once thought it would.

I'm married. That happened much sooner than I'd ever considered. I'm a cat owner, even while everyone knows that I am a big dog person... both in the sense that I love all dogs all the time, and that I especially love BIG dogs. I work as an Account Manager for a large commercial insurance firm. I work for my mom. I do not have an advanced degree. I have not moved away from Livermore. I have watched more X-Files episodes than I care to admit.

These are the facts. I lead a charmed life, an adventurous life, a life of love and activity and purpose. It's coming to terms with the truth that the purpose is so different than what I'd once believed that can sometimes trouble me. Only for a moment, though, and then I'm holding my husband's hand and we're off to have Chinese food before it's time to hit the gym.

Recently, Jon and I were asked about our "two-year plan." Jon looked at me, and I nodded in agreement as I watched a wan, tepid smile appear on his handsome, thirty-year-old face. Two-year plan?

If we'd been asked that question two years ago, our Plan would have included home ownership. That's why, last year at this time, we were in the throes of purchasing what we were thrilled to think of as our first home. That was shortly before the housing market collapsed around us. We'd imagined that town home as a buried treasure, a place meant just for us to find, within walking distance of all our favorite downtown spots, a sweetly priced deal for the size, a fun floor plan just begging for paint and artwork and furniture all our own.

But lenders ceased lending and, though we had our down payment prepared, though we'd signed all the papers, though the bank had 'okayed' the deal, our mortgage wouldn't come through.

We lost money on that process. What's worse, we lost time, four summer months spent entirely focused on that purchase. What's worst of all is that we lost our enthusiasm.

Today, neither of us is intrigued by the idea of home ownership. What ought to have been the next exciting adult step in our combined life has become a dreaded secondary path, something which we simply know will give us ulcers and bleed our savings dry.

And so, our response to the concept of any plan beyond the next month or so is sardonic.

To get around this, we deal in dreams rather than plans, and our biggest dream for the future includes living abroad for a couple of years.

Having done so much traveling in so many fascinating, exotic, alluring European countries, Jon and I think it would be an incredible adventure to try an absolute change of scene. We want to immerse ourselves in a land of foreign language, foreign ideals, foreign history... a place where we are the aliens and must learn and adapt, must rely on our wits and on each other to succeed.

Still, the current global economic climate has placed a severe damper on that dream. Already, it was tough for an expatriate from a non-EU country to obtain a job in most European nations. But today, when demand is so low and local supply is so high, the odds of successfully seeking employment in Switzerland, Belgium, or Germany are much lower, especially when the ex-pat in question has no in-country connections.

That fact has been hard to swallow.

Jon and I were both raised to keep our expectations high, to maintain our optimism; we've been taught that hard work and skills will get us where we want to go. Our desires are valuable in the USA. Not so in the rest of the world.

Understandably, it's with a heavy heart that we move that dream, that beguiling pipe dream, to the back burner. We hope that, in a couple of years, economic recovery will be well under way. We hope that opportunities will return to what are now barren hillsides and bloom for the picking.

So what of the years until then?

Jonathan and I are blessed to be employed in stable, lucrative, career-oriented positions. We don't need to change anything to be completely taken care of for the foreseeable future. But again, that need-based perspective is not something we understand very well. We are two people born and bred in a time of plenty. We have long been under the impression that what we Want can often be more important than what we Need.

And, oh, we want so many things. And we want them sooner rather than later... Now, in fact, while it's easier to dream and to achieve those dreams.

Jon and I are in the midst of that delicious period of life when we are responsible to and for no one but ourselves. We are not crafting and protecting the lives of children; we are not bound to or dependent upon the lives of our parents. As long as we arrive at work on time and complete our tasks quickly and accurately, we'll receive our paychecks. It's up to us how many hours of sleep we get each night, how many meals we eat at restaurants rather than in our own kitchen, how many activities we squeeze into our bulging calendar

Now, we've been married almost five years, and for almost five years we've been hearing the Kids Question from all sides (except from our parents; so, thanks, Moms and Dads). Officially, we don't accept that pressure, of course. Jonathan has no desire to have children, period. However, I think Jon, with his engineering mind, his sense of adventure, his love of all sporting and outdoor activities, his firm, principled view of the world, would make an incredible father. But what Jonathan doesn't want to think about, he doesn't think about. Stubborn, yes. Never belligerent, but firm and all-but-unyielding.

For me, though, he'll yield all, if I ask. It's just that, out of respect and an all-consuming love, I rarely ask. That's a balance we've struck since we met, and it works for us. I won't ask Jonathan to be a father. He won't ask me not to be a mother. In God's timing, we will fulfill all aspects of life which we are meant to fulfill. If parenthood is on that list, we'll come to it with curiosity and some blend of excitement and anxiety. And we'll succeed, insofar as being a parent can be successful, because we're a great team.

Right now, though, our intention is to keep the door on that issue entirely closed for the next four to six years.

So what of the years until then?.

We love to travel. It's our favorite thing to do. Together, we want to see the whole world! Minus the magic carpet, the royal status, the genie, and their exquisite tans, we're Aladdin and Jasmine. (Leave it to me to see our lives through a Disney-tinted lens.)

Going new places and seeing new things is Priority One in the Camp household. We would never do anything that would hamper our ability to move freely and often. Currently, our intention is to pack as much travel and adventure into our schedule as our vacation allotments and budget will allow.

Beyond that, there is the fear that our roots are growing too deep too fast. Though we see the value of community, though we love our families and our friends and our church and our gym and our fine, little town, both Jon and I harbor the fear that we will arrive at 80 (and 76, haha!), still in this spot. We worry that our vantage point on the world and all that happens in it will not have budged from this X on this tiny map. It's staggering how much this possibility bothers us.

Last semester, I got a taste of a different vantage point. I enrolled in a college French class and studied hard. I learned to loose my tongue from the flat, standard clamp of the American language and allow it the freedom to flit and float and wrap around the dainty, lacey syllables of French words. My lips morphed to form the long, curling sounds of French verbs. It is a tacitly active language. It requires playfulness and creativity, conviction and desire.

But the best education would be to go to a Francophone nation and listen, parse, discuss, interact, bargain, explain, absorb and learn it. Total immersion. I want that. And Jonathan, bless his English-only heart, wants that for me. (Really, all he wants is a pretty translator on trips... so we both win.)

Our goals, as you can see, are a bit vague. They take into account the sensibility of income, the weight of personal dreams and desires, and the vicious whip of fear at potential stagnation. Our dreams are simmering under the low boiling point of the current economy, but they are definitely alive and waiting for us to breathe activity into them.

Where will we be in a year? In two? In five? We don't have any solid idea. Let's put it this way... Before I'm thirty, I'd like to be posting this blog from another country. Before Jon is thirty-four, he'd like to be within driving distance of the Alps. Until then, we're flexible. Now, if only we could get our hands on one of those magic carpets, we'd be all set!