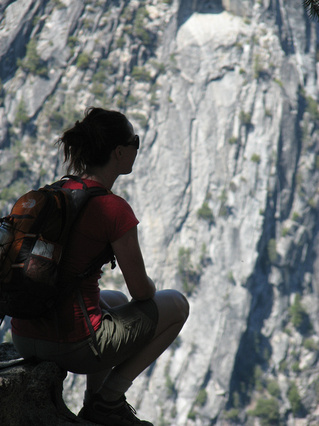 Yesterday, I listened to an interview with Erik Reece, an author and English professor at the University of Kentucky. When he was young, he lost his preacher father to suicide. Understandably, Reece grew up at odds with a church which pounded fear and guilt into (and, perhaps arguably, out of) the hearts of its parishioners.

Reece's childhood church burned down when he was seventeen years old, and he took this to be an omen that it was time for him to follow his own path into the world, rather than walking in the well trodden footprints of his father and grandfather, a charismatic preacher. After his father's suicide, Reece's mother gave him the Bible which his father had kept close to him since his time in seminary. It had been on the table beside the bed where he took his own life, and the page where the bookmark had been tucked opened to Matthew 10.

34 "Do not suppose that I have come to bring peace to the earth. I did not come to bring peace, but a sword. 35 For I have come to turn a man against his father, a daughter against her mother, a daughter-in-law against her mother-in-law-- 36 a man's enemies will be the members of his own household. 37 Anyone who loves his father or mother more than me is not worthy of me; anyone who loves his son or daughter more than me is not worthy of me; 38 and anyone who does not take his cross and follow me is not worthy of me. 39 Whoever finds his life will lose it, and whoever loses his life for my sake will find it.

This is a passage with which many Christians struggle. Christ, son of God, sinless lamb, bringer of a covenant founded on unconditional love, here proclaims his purpose to divide families and to bring a sword to the world. This is not the peaceful, arms-wide-open image modern Christians like to project. This Christ is, in the words of Erik Reece, an egomaniac.

In the interview, as in his new book, Reece asks, "Who is this person speaking two thousand years ago, a complete historical stranger, saying that we should love him, who we are really incapable of loving, more than we love our own fathers and sons?"

There is little solace for Reece when his question is posed this way. How dare God pit members of a household against one another? How dare He ask me love Him more than my own father?

God has no qualms about asking us to love Him more than anyone or anything else. The way I think about this verse is simple... He may ask me to love Him more, but He does not ask me to love my family less. The more I love my husband, the more I must love God... and as I believe that, in the actions of love, I am responding to His calling, everything works in that good and purposeful pattern He ordained so many millennia ago, so many dimensions hence.

But for a disbeliever, one can see how Christ's assertions in Matthew 10:34-39 could be troubling. Such is the way of God's expectations. He is an audacious God, if audacity can be ascribed by mortals to an infinite being, to their own creator. He expects much of each of us, and He is the one who knows our exact capabilities, our precise limitations, our nuances. That's the way He knit us together.

In another audacious stroke, God asks us for faith. The disbelieving world is incredulous at this prospect. Our God asks us to believe in Him without seeing Him... and yet, He also allows us to see so much of Him at the same time. We're surrounded by Him even while we're being confounded by (and disgruntled by) that call for pure faith.

Two weeks ago, I was standing just above the mouth of Illilouette Falls, where a robust green river explodes from a hidden canyon and cascades in a fury of white mist down the mountainside. Before me was a panoramic view of Yosemite Valley and the behemoth walls of granite which surround it. It was too massive to take in with my mere human eyes, and I felt the desire to genuflect in the presence of such grandeur.

Beyond the glaze of my own tears, rinsing my lenses in response to the sting of sunlight after only a moment of darkness, I could see the blurry outlines of all those mountains, of all those mammoth trees, of all that ice cold water, still looming before me. It was as if I was seeing it for the first time, and it stole my breath away.

That feeling reminds me of seeing a video of my friend's new baby girl, still red and freshly uncoiled from the womb, resting on white blankets. The camera captured her first few blinks.

There is a depth unmatched in a pupil contracting upon its first meeting with Light. Peer over the rim of that ink black pool and you will find yourself face to face with Time, with Infinity. From that place, I can imagine the sun dropped into the universe like a coin, suspended there. I can imagine the immense darkness shuddering and evaporating in the presence of the newly arrived, flaming orb.

This is first sight. Translucent pink eyelids rising, splitting at the seams beneath rows of dewy lashes, and fluttering in the painful presence of sun, but refusing to close in favor of seeing mountains thundering from beneath vast, muted seas, and white caps of foam blooming from the tops of retreating waves, and hundreds of millions of eager, green blades of grass stabbing at the air, propelled from somewhere sacred beneath soil which has only just been caked over the stone. This is Genesis.

Just as God is present in the blinking, liquid, alien eyes of a newborn, He is present when I am thunderstruck by His creation. It is the step before believing without seeing. He gives each of us the gift of seeing without comprehending. Every piece of earth, every ecosystem, every raindrop was crafted by His hand, and He lays it out before us without explanation.

Here , He says, a gift . Not evidence to be presented in His defense at His trial by the world... but presented first, out of love, just because, and in good faith.

Erik Reece's most recent book is The American Gospel , a compilation of works by everyone from Walt Whitman to Henry James on the topic of religion and faith. Though Reece does not attend church, he now usually spends his Sundays "out in the woods." Some might call these escapes meditative. They might say he is communing with the divine. They might say he is enhancing his spiritual experience. I say that he's simply walking, treading his own path to an end already known, though he himself doesn't know it, and that in his pursuit of anything else, God is pursuing him... that He is, in fact, all around him.