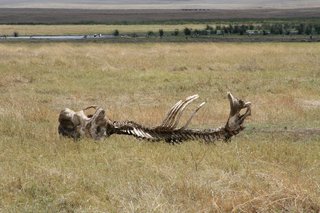 How do you eat an elephant?

The correct answer: First, cut it into little pieces.

The Salinger answer: Drag it deep into a cave, all alone, and attempt to swallow it whole.

Or, declare that anyone who would eat an elephant is beneath contempt and then stalk off in the other direction.

This is one of many passages in Dreamcatcher , a memoir by Margaret Salinger, daughter of Catcher in the Rye 's J.D. Salinger, which hits home for me. As a stubborn-willed gal born of stubborn-willed parents, I am all to familiar with the concept of approaching a "problem" differently than my friends and peers.

Every once in a while I find myself caught off guard by a Problem, cornered and without any pre-reasoned response, I must admit that my gut reaction is Salinger-esque. Usually, I treat the encounter the way I'd treat an encounter with a mountain lion... I pull myself up tall and swing my arms out wide to give the illusion of massiveness on my part, then holler unintelligibly at the Problem in the hope that it will turn and run, tail between its legs.

Not the most sophisticated solution, to be sure, but one can hope...

If the Problem doesn't skedaddle in fear at my obvious ferocity, I attack. No strategy, no troops in reserve, just a Light Brigade charge, fast and forward. Once again, the hope is that the Problem will panic and retreat. Often though, inexplicably, it holds its ground, choosing to stand and fight.

So, finally, I heft my caveman club through the air, bop the Problem on the head and drag it back to my cave by a hindquarter.

Huddled in the dark with the hulk of an unconscious elephant before me, I squat by the fireside and poke at the embers, wondering if I can safely leave this momentarily felled beast of a Problem hidden and go on with my life.

The answer is never Yes. All unconscious elephants wake up, and invariably they end up leaving the cave in search of the one who bopped them in the first place. Elephants, as you might recall, never forget.

The only answer is the destroy all evidence of the Problem once and for all.

Still hunkered down in the cave and out of options, I remember an old movie: The Princess and the Pirate . Bob Hope opted to eat a parchment treasure map as a last resort, thus keeping the irate, behooked pirate captain from finding the stolen article and slitting the thief's throat. Desperate, I determine that I must gulp down the Problem, knowing it will come back to haunt me if I get squeamish and run away.

Therein lies the final evidence of my original error in judgment. Had I requested help in thwarting the Problem in the first place, the spoils of "victory" could have been enjoyed by legions of comrades in arms... dusted off in one hungry meal... leaving only the tall, curving elephant ribs on the table.

Alone, I stoke the fire and prepare to field dress the carcass. It's never pretty. It's never easy.

Next time, I resolve, I'll ask for assistance before the battle begins.