Recently my family received an invitation to a surprise 40th birthday party for our old friend, Jennie Doering, a woman I knew when I was between the ages of ten and fourteen. As part of the invitation, guests were encouraged to submit stories and memories of Jennie from years gone by. Jennie, you see, is a storyteller herself, therefore appreciating such gestures all the more. This was the perfect opportunity for me to write down my memories of Jennie.

At eleven-years-old, I was a tall, skinny girl aching for adulthood, and much of my time was spent structuring a specific definition for the term "grown up." My main role model was, naturally enough, my mother -- a strong, assertive business woman with a quick laugh and an incredible sense of fun. But I sought influence elsewhere, too. Characters in literature from Nancy Drew to Scarlet O'Hara to Lois Lenski's Strawberry Girl impacted me, as did my teachers and neighbors. 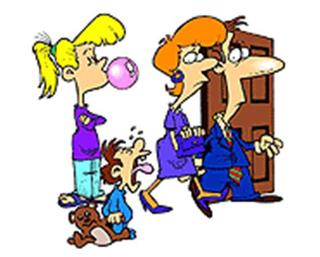 When John and Jennie moved in next door to my parents' home in Newark, they were energetic, smiley people, and seemed not to mind the curious stares of the many neighborhood children. Jennie, you see, was pregnant at the time, and it was the first time I was old enough to acknowledge what that condition meant. There would be a baby and, as my mother pointed out, I was soon going to be old enough to transition from the babysat to the babysitter .

Such began my relationship with Jennie. She was perfectly willing to entrust brand new baby Emilie to my care, young as I was. At first I went to the house while Jennie was home and played with Em as Jennie operated in the periphery, but it wasn't long before I was spending an hour or two alone with the little one.

On one such occasion, I put Emilie down for her nap and realized I'd forgotten my current Nancy Drew installment at home. The Doerings and the Pancoasts lived in townhouses, side by side, so I didn't think it would be hard to run five steps to the East, grab the book, and return. What I didn't bargain on was the front door of the Doerings' house closing behind me... and locking.

Panic set in. The baby was in the house alone (albeit asleep), and I had abandoned her. Terrified, I ran to my own mother and begged for her assistance. Mom collected herself and grabbed a credit card.

I wondered what we would buy. A battering ram? A hatchet? A replacement door?

Perhaps she expected John and Jennie to be outraged and threaten a lawsuit, and planned to preemptively offer a settlement of sorts.

When Mom crouched on the front step of the Doering's house and began manipulating the small plastic card between the door and the frame, my jaw dropped. I had no idea Mom had given up a career as a cat burglar in order to raise children!

The door popped open and I flew inside and up the stairs and around the corner and into Emilie's room to find that she was still in her crib, snoozing contentedly, unaware that we had narrowly avoided disaster.

Then came the big question. Should I tell Jennie what I did? Or should I let it go and hope Quadra wouldn't mime it out for her? While I was fairly certain the cat couldn't communicate the cold, hard facts to her owners (and wouldn't because, well, she and I had an understanding), I opted for Truth. Mom let me figure that one out on my own, but it really boiled down to, "What would Nancy Drew do?"

Unsurprisingly (now), Jennie's response was more than charitable. She had no intention of blacklisting me from her potential babysitter list. In fact, she appreciated my honesty. Guilt evaporated. I never again left that house while on duty, and babysitting Emilie became one of the first real, pleasurable responsibilities I had.

Of course, as much fun as I had with that sweet little girl, I enjoyed those times more because I was operating in Jennie's bright, brash sphere... a place where new, multi-syllabic words bloomed in the midst of easily intelligible sentences... a place where brand new perspectives were placed in my path like well-aimed binoculars... a place where I was never actually wrong, but rather had an opportunity to formulate and present arguments.

I distinctly recall a ride to the chiropractor. During Jennie's appointments, it was sometimes helpful if I came along to play with Emily. I have no idea where that office was actually located, but I remember the drive being long enough to allow a couple of life lessons.

On the radio, a reporter was giving an update on the O.J. Simpson trial. Feeling free to express my opinions in her company, I announced to Jennie that O.J. Simpson was guilty and ought to executed immediately. While I'm certain that Jennie was shocked to find a fifth grader taking a stance on capital punishment, she didn't show it. Rather, she invited an explanation. What was the foundation of my belief?

I considered this... realizing that I had no foundation (beyond the fact that my parents' views on the event were identical to my own, and were consistently discussed rapid-fire at the dinner table).

Jennie stated her side, disagreeing with capital punishment. I couldn't believe it. I'd never heard anyone come out against it. My mind ran wild, wondering what else my parents might not be absolutely, unquestionably right about. (Today, a decade and a half later, I maintain my stance on capital punishment, but now that belief is the result of years of thought, consideration, and debate. Today I have a foundation.)

But before politics and debate, I was immediately fascinated by Jennie's vocabulary, her interest in books and their authors, and the fact that her major in college (a concept I was just discovering and obsessing about) had been based on literature. One could be granted a degree simply for her love of reading and writing? It was too good to be true! I wanted to know about college, ALL about college.

Berkeley. At that point, it was just a word I'd heard spoken, a University I'd heard referenced reverently (albeit with one eyebrow raised) by my straight-laced parents. By listening carefully and taking notes, it wasn't long before I, too, had begun associating UC Berkeley with bare feet in Birkenstocks and morals as squirrely as the long, dreaded hair of its pot-smoking residents.

But Jennie wasn't like that. She was smart and quick-witted and, best of all, wrote stories. I quickly added Berkeley to my list of Awesome Colleges --a neatly spaced, numbered list I catalogued in the pages of a spiral-bound notebook tucked away in my closet, hidden behind my American Girl doll.

I loved to watch John and Jennie when they played volleyball on weekends with my parents and their friends. No one was very good, but everyone had a terrific time. Then, going home, I was thrilled to be picked to jump into the Doerings' car -- a chipper, blue VW Cabriolet convertible which embodied fun and speed and wind whipping through my hair.

Now I am a "grown up," though I wouldn't say my definition of that status is yet complete. Interestingly, my life today reminds me of the one John and Jennie shared in the mid-1990s. I am married to a computer science engineer named Jon. We rent a little house. We have two cats. I graduated from UC Davis in 2006 with a B.A. in English, and I continue to nurture my own creative writing skills passionately, hoping that one day it will be more than a hobby. While Jon and I don't have children, if that happens one day, I look forward to hiring my first babysitter. With any luck she'll be a plucky, curious girl, a voracious reader, and I'll have the chance to affect her life as Jennie once profoundly affected mine.