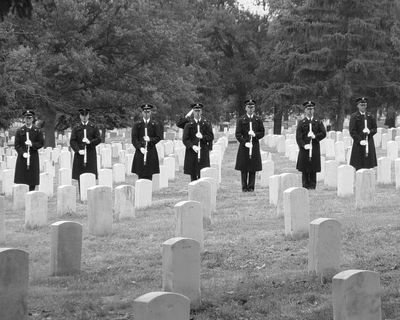 Today we honor our veterans, both dead and living, who have served in every war or conflict in which the United States has held a stake. Both of my grandfathers and both of my grandfathers-in-law served in WWII. My brothers, Ted and Curtis, are each in service to our military today, along with several of Jonathan's cousins. I dedicate this entry to them.

I wake up in the morning and shower and drive to work. I sell insurance. I partake in hobbies and leisure activities. Then I come home to share a hearth and a table and a bed with my husband, a man who also works on behalf of our nation's security. I am like so many blessed people. Freedom laces each of my personal moments.

I choose to drink a Diet Coke before 9:00 am. I choose to take riding lessons at a local equestrian center. I choose to attend a movie with my best friend on a Monday night. I choose to worship God, travel the world, drive a car. Every one of these choices is sacred in a sense, especially considering that there are those in the world today who are denied any and all of these things, and especially considering that there are thousands who have died in the pursuit of the preservation of these freedoms, petty or important as the case may be.

To me, Veteran's Day is the perfect time to begin an entire season of acknowledgment and charity. We are fast approaching Thanksgiving, an American holiday initiated as a celebration of gratitude. When newcomers to America were starving, those who had occupied this land for centuries, and who had every right to stave them off, chose instead to share a harvest, a bounty, an excess. That day, that joint feast between Native Americans and Pilgrims (though most likely gilded by history), had nothing to do with fairness and everything to do with mercy and humility.

Times are turning tougher by the day. Rumblings of recession and rumors of depression threaten the stability of our entire country. We who have so much will be expected to give more than our share in the coming weeks, months, even years. Many will complain in the face of this reality. Maybe, on a particularly bad day, my own selfishness will induce complaint, as well. But my plan is to push forward in a mode both optimistic and generous.

Before long, the yuletide spirit will bedeck every streetlamp, every front door, every store window. Charitable giving always increases in the months of November and December. Perhaps there is something about cold air and the palpable reminiscence of holidays past which urges us to drop coins in the bright red bucket outside of Macy's. Whatever the case, we ought to stimulate the drive to do good in ourselves and in each other.

Donate canned goods and Winter coats , serve at a soup kitchen, wrap presents for children who won't receive gifts otherwise (I recommend Operation Christmas Child , a drive put on by Samaritan's Purse which Jonathan and I participate in annually), give blood , smile at strangers, buy coffee for the man begging on the street corner. It's easy. It's right.

Christmas, as you'll recall, memorializes a dark night when two young people in dire circumstances found themselves homeless, hungry and in need of every kind of assistance. A man offered them a stable, as that was all he had, and in that stable a baby was born who would become the man whose story would impact millions upon millions of people for the next two thousand years.

I am alive today because someone else is not. I am safer today because a Soldier, Sailor, Airman, Guardsman or Marine chooses to stand between me and those who would do me harm. That legacy of selflessness must be paid forward if I am to do justice to the memory of the millions who have fought for me.

It should be noted that, while I am referencing the American holiday, Veteran's Day, November 11 is also celebrated worldwide as Armistice Day, Remembrance Day, Day of Peace, Polish Independence Day, etc. Our impulse to honor those who have served is entirely human and visible on every side of a conflict, another reminder that we are not so very different from any perceived foe.