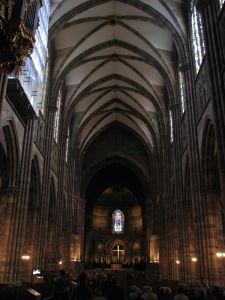 On Thursday, Jonathan and I spent the morning in Strasbourg. Our original plan had been to quickly get on the road, but there was something about that lovely city which had sway with us. After breakfast at a patisserie across the street (Michele's) where we ordered coffee and pastries, we headed to Strasbourg Cathedral to take more pictures and to pop inside for a look.

Reverence filled the expanse of the interior, emanating from the worshipers of God and Architecture. There were tour groups and classes on field trips, young couples and elderly couples and traveling buddies and girlfriends, all of whom couldn't tear their eyes from the lovely stained glass windows, the massive Bible under glass at the front. I lit a candle for our country, praying for peace and reason to prevail at this new dawn of ours... the one masquerading as a doomsday. 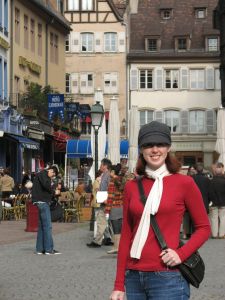 Soon enough, we were on the road to Zurich. Our lodgings at the Hotel Enginmatt are fabulous, very comfortable and stylish, but we didn't waste time in our room (even though the jet lag pit bull had me by the eyelids again and was trying to tug me into bed). No no, we had traveled halfway around the world to see this bursting, blossoming city and couldn't wait another second.

The Bahnhoffstrasse beckoned us first; a luxury shopping strip of several kilometers, almost completely pedestrianized, running parallel to the River Limmat. Naturally the price tags were a tad over our budget (1,100 Swiss Francs for a small purse), but the looking was very fun.

Around us, night was falling and people were moving in jovial groups, communicating in a variety of languages. German, French, and Italian words skipped around us in the shadows, bouncing off the brick and stone facades of the buildings playing hide-and-seek with one another. A smattering of other languages, Swedish, Mandarin, and Spanish, joined the game, as well. I floated along on Jonathan's arm wishing with all my heart that I had the chance to dedicate myself to the study of language so that I could develop the capacity to better understand these people, men and women who share my globe. What an opportunity that would be! 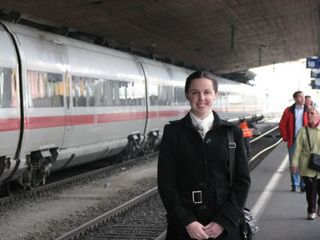 Having walked the length of the major shopping district and having noted several smaller alleys and squares where shops were closed which deserved a closer look, we hurried to the banks of the River to take a few pictures before going to bed.

Friday was our first non-driving day, and it was necessary. We were sick of being in a car, tired of glimpsing culture and history and beauty from behind glass. And most of all, we were ready to touch Switzerland.

Public transportation in Zurich is fantastic. An intricate yet straightforward system of trams and buses and trains runs consistently and often throughout the city center and immediate neighborhoods. The Number 13 tram picks up just around the corner from our hotel and we've become regular riders already. On Friday it dropped us at the Hauptbahnhoff, the main train station in the city, giving Jon a chance to ogle the trains and me a chance to shop for postcards. (Speaking of which, we've written them, Family, and they'll be in the mail tomorrow!) 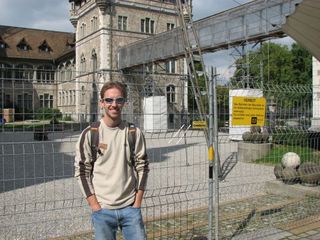 Across the street from the station is the National Museum of Switzerland. We took our own tour, thanking our lucky stars that so many of the exhibits included descriptions in English.

(You'll see to the Left that there was some serious construction going on at the National Museum... and that caught Jon's eye!)

Inside... the archeological segments were interesting, of course, as I've always harbored a secret wish to dig for buried treasure... I think all closeted, would-be pirates do... but what really captivated me was a massive collection of personal portraits done for a particular royal family in the 16th and 17th centuries. I stood and considered those paintings, the faces and busts and posed stances of men and women, boys and girls, all ages, wondering about the subjects.

One young girl had the most beautiful green eyes, but she had been posed facing slightly away from the artist, while all the other portraits were done face-on. Perhaps the artist was in love with Marguerite, but knew the portrait was being done for her perspective husband, and cleverly opted to turn her eyes away from the viewer, keeping her lovely, sea-green gaze askance, perhaps pocketing it for himself. 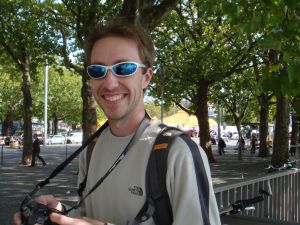 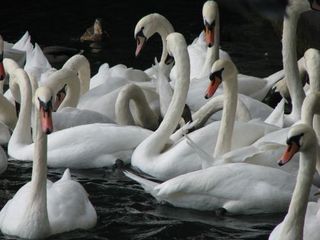 Upon leaving the museum, Jon and I took a long stroll down the River. I was enamored with the many grand, floating swans on the water and took way too many pictures of them. Jonathan, in turn, took pictures of me taking pictures of the swans. I think he was trying to distract me from my love of the birds so we could get on with our afternoon... but he only succeeded in having me take more pictures of HIM! Take that, mister!

The weather was perfect, clear and bright, just chilly enough to require a coat in the shade, but we ate lunch in our shirtsleeves, basking in the sun.

Lunch was pizza from a traditional pizzeria at the lake's edge. The wait staff spoke Italian almost exclusively, and a single waiter was being called from table to table to do translations.

He seemed to enjoy this connection to patrons and co-workers, making a special point to be patient with everyone, clarifying an answer before turning to pass it along. Again, the idea of being a hub of communication, living to clear the Babel, intrigued me. 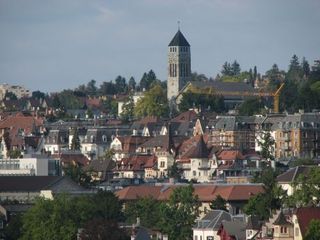 The highlight of our day was a climb to the top of Grossmunster, one of many impassive churches sprinkled throughout the city. It's twin bell towers are immediately recognizable by locals, so Jon and I felt it would be well worth our time. Never has four Swiss Francs been so well spent. Seven or eight staircases led us to panoramic views of the entire city, lake and mountains and river, uncountable steeples all over the skyline. We took so many pictures, our cameras were groaning. 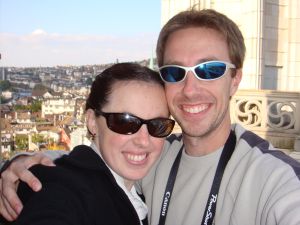 I was even excited about the graffiti,declarations of love scratched in the paint by arduous teenagers (I hope). Wolfgang and Astrid were my favorite... I hope they made it!

Waiting to cross a street later that afternoon, I noticed that the girl standing next to me in the crowd had forgotten to remove the Medium sticker from what appeared to be a brand new jacket. I've done this many times, and loathe figuring it out late in the day when I know people have seen and not warned me. So, I reached out and tapped her arm and said, "Excuse me, but you've forgotten the sticker on your coat." This is a gesture I perform on a regular basis in life... anytime I see an unfortunate victim of Tag?-What-Tag?-isis . Usually I am profusely thanked, some people react defensively, but regardless, I'm simply acting out the Golden Rule.

In this case, though, the girl on the corner appeared puzzled, shaking her head. "Oh," I said, rightfully realizing that, duh, she's German and didn't know what I was saying. Trying another tact, I motioned to the front of her coat and repeated my statement. She said, "No." Finally I smiled and said, "New coat. Sticker. Look look." Still pointing and giving what I hoped was a universal version of a sympathetic smile. When she saw the sticker she burst out laughing. "Oh! Just bought! Thanks you, thanks you!"

Then I said, still smiling widely, "No worries. I've done it a zillion times!" And even though she didn't have a clue what I'd said, she knew precisely what I meant and gave my arm a conspiratorial squeeze before the light turned and we were swept across by the crowd.

By the end of the day, Jonathan and I had criss-crossed the entire city center. We'd browsed antique book sellers and kitschy souvenir stalls and paid way too much for a Starbucks mocha for Jon. It was dinnertime and were ready to collapse. However, Jon had read about a free concert being given at another amazing church which was supposed to include violin and cello renditions of pieces by several major composers. Without a second thought, we wrapped ourselves in jackets and scarves to brave the chilly night air and hurried to the tram stop. 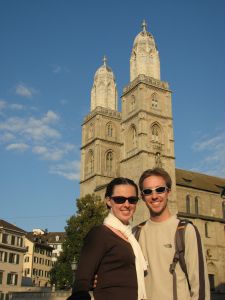 We made the concert in time, but it turned out to be a showcase of different pieces done entirely on an organ. The sound reverberated between the giant stone columns, stirring that happy hymn-singer I keep locked away for the sake of the general, hearing public. But when the organist took her intermission after 45 minutes and an odd version of La Marseilles, we were ready to take our leave. We dropped a donation in the bucket, smiled at our successful spontaneity, and stopped for a hot chocolate (with Baileys... did I mention it was cold outside?!) before returning to the hotel.

Zurich is a lively, colorful city... something I'd realized during our original explorations at ground level, but became compelled by once we saw it from above. Much like the deep, raw emotion I felt when I saw Copenhagen from the top of the Rundtarn last year, this bird's eye view of Zurich brought the little beauties of the urban area into sharp focus. There may appear to be too much to do, too much to see, too many people; but from above, I only noted a near perfection, a striving from the city's core. Zurich will welcome you, nurture you, remind you of old desires which ought never to have been abandoned. If only every city came complete with a place to think from on high.