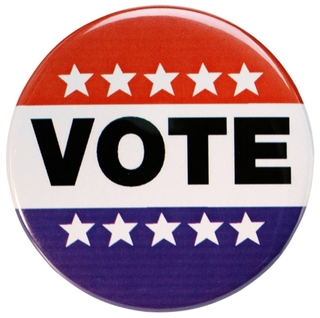 Two men are vying for the most powerful political office in the world. On the Left is Barack Obama, the young, African American Junior Senator from Illinois, an articulate orator, a Harvard graduate. On the Right is John McCain, the aged war hero, four-term Arizona senator and former congressman, Naval Academy graduate, and the one who fits the historic American President Mold.

While many are loathe to vote for a candidate running on the opposite ticket, I have long believed that America would be better off if people took the time to consider the individual running for office rather than the broad brush of his or her political allegiance. Thus, since the arrival of Barack Obama on the political scene, since the confirmation of Hillary Clinton that she would campaign, since Mit Romney's first speech as a presidential candidate, I've been looking forward to casting my vote, not for a Republican, but for the right person for the job.

Naturally, I had an ulterior motive as a woman to see a woman in the White House in the capacity of a leader rather than as a leader's wife. Part of me was willing to drop some of my long standing political beliefs and vote for Hillary if only to aid her in shattering that damn glass ceiling. As the primary race continued, however, that initial thought wavered. I would rather vote for someone who is most likely to identify with the same social and political priorities as mine. Obama, of course, as a black man, has his own barrier to break, and there are many who consider that more important than his stances on the real issues. I agree that it is exciting that he has the chance to make history, to be the first black man in the White House. But let us stop and consider the fact that his election really ought to be on par with the election of anyone else. In a perfect world, Obama being elected would be statistically as possible as the election of an Hispanic person, Asian person, a Caucasian person, a Pacific Islander... any American. There are ten thousand different iterations of Presidential candidate we haven't seen. Will there always be this frenzy? When a member of each other race is eventually elected... When a homosexual person is elected... When a Mormon or a Buddhist or an Atheist is elected? There shouldn't be. So, let's take a closer look at the things that matter.

Energy High gas prices have pinched my good humor in recent months. I would like to see America escape from a dependency on any nation for something as critical as fuel, and I especially want us to be free of a dependence on hostile Middle Eastern countries. My hope would be that this would cease to be a partisan divide and that our lawmakers would commit to thoroughly researching every alternative, including off-shore drilling, including "clean coal," including bio fuels. It is most likely that no one solution will be our final answer and that some combination of the aforementioned (and others not yet discovered) will set us free. We need a quick fix as a stop-gap while researching the lifelong solution, something Barack Obama is not willing to provide. Aligned with: McCain

I believe in a woman's right to choose... but I'm not talking about her right to terminate a pregnancy. Rather, I believe in a woman's right to choose to have sex in any context. Once her choice leads her stumbling into an unwanted pregnancy, however, I believe she's out of options and ought to disregard her selfish desires in favor of the Life growing inside of her. Because the women who find themselves in this position are often ill-prepared to be parents, I believe in a woman's right to choose to give the baby up for adoption to parents who will care for him or her. Now, I also believe that conservatives often turn a blind eye to the truth preceding the millions of terminated pregnancies in the U.S. Ignorance is the anti-birth control. Tell a woman about condoms and she might just give the gadget a go. Give a woman a condom and she'll potentially have one night of safe sex. Educate a woman about the benefits of birth control and give her affordable, convenient access to it, and we'll vastly reduce the number of abortions each year. Barack Obama is off the charts to the Left on this one. McCain is Pro-Life, at least verbally, but I worry that he doesn't find sex education to be a priority. Still, there is a chance with a conservative-leaning Supreme Court that Roe v. Wade will be overturned in my lifetime, potentially forcing women across the country to be more responsible with their relatively new sexual empowerment. I certainly hope so.

Affirmative Action I believe every American should have the right to an education, to a job market, to a living wage. But I bristle against the kind of entitlement which permeates my generation and increases the numbers of young people who lack the personal drive to achieve these goals. Education, employment and pay should be earned, should be the rewards of hard work. American ingenuity and success are only the products of concerned, engaged citizens who seek to better themselves and their social environment by proxy. If we allow these three integral parts of the American success story to be doled out to folks based on race, religion, income level, etc., we not only set a pattern which perpetuates a philosophy of entitlement in the recipients but, worse, we devalue those pieces of the American dream. Barack Obama is all for Affirmative Action in our school systems, our workplaces, etc. He preaches personal accountability but does not vote to send that message home. While I acknowledge that Affirmative Action may have had its place in reversing the direction of the pendulum of racism which affected every part of American life in decades past, today it should not be necessary. And if we come across an industry where racism or another prejudice is in play when it comes to competition, the perpetrators should be severely punished to send a message. But depriving a hard worker of his goal to send the same message is un-American and should be stopped. Aligned with: McCain

Economy We're hurting, and I don't have an answer. Nobody wants to pay more taxes, but I think that's unrealistic. There are simply too many home front issues which will require money to fix. I don't believe that the quasi-Robin Hood idea of taxing the richest is a in order to fund programs for the poorest is a smart one. Part of the American Dream is often increased wealth, so why should those that achieve such a dream be punished? I would much rather provide incentives to encourage the benevolence of rich Americans (the great majority of charitable donations already come from this top tier, and this group also already provides an insane majority of collected taxes), perhaps tax breaks on donations to specific programs. But we ordinary, middle-income citizens ought to be open to paying more taxes in order to pull America up by her bootstraps. Before anyone raises or cuts taxes, however, our President needs to take a long hard look at the economy and prune the programs which provide the least bang for our buck. It's a matter of survival in this case. Both candidates have mentioned potential tax increases, but a good President must be prepared to pull the superfluous dead blooms from the bush so that the necessary ones might thrive once again. Aligned with: Undecided

Iraq After September 11, 2001, I was as bloodthirsty for Osama Bin Laden as any other American waving a mournful but defiant flag on a streetcorner. When President Bush declared war on Terror, I felt a thrill. He brandished our power and our decency in the resentful faces of our cowering foes and sent thousands of troops into Afghanistan. I agreed with that move then. I agree with it now. Undercutting the Hussein regime in Iraq was a bold and long overdue move which I also supported. My brother served bravely in Iraq during this time. Now I become more and more skeptical at our continued presence in that country. America shouldn't withdraw in order to win a popularity contest, but if there is a chance that regrouping and considering another strategy in what will likely prove to be the longest running war in history, I am open to such a decision. However, because of the world climate and the continued presence of terrorists aching for a chance to shoot down the American Dream, I want a President who is tough as nails, one who understands completely what it means to be Commander-in-Chief. Aligned with: McCain

There are, of course, many other important issues, and I'm not through postulating yet. But this is a good start for me as I hash out which candidate will receive my vote in November. I believe I am a registered Republican, but I don't see that it matters much. We, the voters, should require any individual to run on his or her honor, personal philosophy and code. Each of these men is worthy of my consideration. Now I can only hope that the rest of America feels the same way.