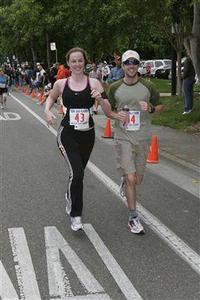 On Saturday, Jonathan and I woke early and ran 8 miles.

Yes, you heard me correctly. We dragged ourselves out of bed at six in the morning on a Saturday, walked to PW Market for a Power Bar and a banana, waited an hour for the sake of digestion, and then began our run from the corner of Vasco and Scenic. The first three miles took us to the base of Brushy Peak, beginning through residential neighborhoods and after that, winding between farms and ranches.

I paused briefly after the second mile to say hello to a beautiful black horse, scratching his nose with one hand and wiping the sweat from my brow with the other. Then I had to hurry to catch up with my sweetie. Every couple of miles we would take a quick walking break, but only for a 100 yards or so before we were at the running again.

Somewhere around mile six, I hit a zone like none I've ever experienced before. My breathing and my heart rate and my stride all evened into a steady thrum. I was gliding down the frontage road near 580 West, eyes on the next turn, about a third of a mile away. I couldn't hear anything, couldn't think about anything. The blankness was a welcome change for me. As we rounded that turn, we slowed to a walk again so that we could refuel for the final mile and a half.

This must all sound very strange, especially those of you who know that I have stuck rigidly to the claim that I am not "a runner" and have never been one. But, much like the way I claimed not to be "a math person" in school as a youngster, I have discovered that such claims are self-defeating. In seventh grade, it wasn't that I wasn't a math person. Rather, math was the one subject which actually challenged me. So, as the easy out, I opted to let myself rely on the vague, deceptive comfort that some people just can't do math, no matter how hard they try (never mind that I wasn't trying terribly hard). And my math struggles were compounded later on because of that early pessimism. Even if I'd wanted to know and enjoy math later, missing the opportunity of building a foundation of mathematical knowledge at the same rate as my peers crippled me for life. Today I still have issues with basic algebra.

It's me. If I'm going to do something, I want to do it well. Very well. Perhaps best. And if it doesn't come easily to me, unless there is some other obvious benefit which I can reap in the meantime, I don't even bother attempting to practice my skills. This character flaw is indicative of my issues with vanity for which I am often ashamed.

And yet, it hasn't defeated me entirely. I am good at the things I choose to do. In fact, and fortunately, I'm good at many things. But, God help me, when I should have utilized that advantage to propel myself to overall excellence, I opted to fall back on my skills for the sake of laziness instead. Don't get me wrong, I worked hard in school and I continue to work hard at life, but only when I know my potential is obvious and will be realized.

What has occurred to me recently, though, is that by ignoring whole segments of skill and knowledge, I'm actually keeping myself from being the well-rounded, wholly capable, Renaissance woman I have always wanted to be.

Within the last few years, I've dabbled at different things, stretching my brain and my body to discover new skills and new passions. Riding horses, for instance, became a favorite pastime. I kept that as a hobby for two years and I miss it terribly now. If could ride horses every day, I would. And, as riding is not something which I or anyone can master quickly, my weekly trips to the ranch were also lessons in humility and stamina. There is nothing more humbling than being thrown to the ground by a two thousand pound animal, one who only moments before you were "controlling" with bit and crop. Brushing the dirt off my britches and rubbing my sore shoulder was tough, but getting back into the saddle after the fall was the tiniest and most important of personal triumphs.

So, when Jon and I took up running on the first of June this year, it was at my behest. Another hobby. Another way to prove to me that I can follow through and achieve something via hard work rather than innate talent.

Immediately, we set a goal for the end of the summer. We would train toward this particular goal, reading books on the subject and holding each other accountable to a running regimen. Together we'd figure out what this "running thing" is really all about.

Jon had a leg up on me as he'd run track in high school; plus he's built like a runner, slender and strong with an admirably healthy heart. He was excited about the prospect of getting back into running condition and was more than happy to have me along for the trip.

It occurs to me every once and a while (okay, nightly) that I am holding him back. We'll start up a small hill and my wind capacity maxes out, something thuds into my solar plexus like a ton of bricks, and I slow to a crawl. Meanwhile, he's bursting with energy, smiling and even talking. With his help I make it through that wall and continue on, eventually feeling much better and, by the end of the night, feeling refreshed and renewed. But my post-run optimism can be dampened by the knowledge that Jonathan could go so much faster, so much further.

He won't hear it. Running with me is more fun and more rewarding for him than anything else. My heart is warmed again. By no coincidence, running with Jonathan makes me faster and increases my endurance (or is it simply that I feel the need to show off in front of my mate?).

In the beginning, my first line of business was to stop saying things like, "Well, if I suck at this, it's because I'm not a runner." Sometimes, on particularly hard runs, especially in the beginning, Jon would catch me falling back into this old vein and would call me on it. I was surprised at how often I tried to excuse myself from actual effort.

Our goal, something we didn't want to share with anyone until we knew we'd more than passed the half-way mark of our training, is to run and complete the Happiest Race On Earth... the Disneyland Half Marathon over Labor Day weekend this year. (I knew nothing about competitive running prior to setting this goal. I simply came across the advertisement somewhere in my nightly internet travels. So, for those of you who don't know, a half marathon is 13.1 miles.)

Training began with getting ourselves to the point where we could easily run 30 consecutive minutes without resting. I believed that this would be no easy task. But within a week, we were able to do the 30 minute runs without a problem. Jon purchased a book, Marathoning for Mortals , and we picked the appropriate 12-week training schedule and began the regimen. This included three shorter, timed runs each week, a couple of cross-training sessions and the all-important rest days. But also included were the ominous LONG RUN DAYS. Each Saturday we were supposed to increase our long run by about a mile. (Every three weeks, the long run drops by a couple of miles for the sake of recovery and to avoid injury.) That rate scared me to death, but we persevered.

On the Fourth of July, we ran the Run San Ramon 5K, our first competitive race (the picture is of us at the finish line...). Our goal was to finish the race without stopping. When we crossed the finish line, our times were 33:15 and 33:16 . I was one full second ahead of Jonathan, something for which he may never forgive me. Our pace was about 10:30/mile, more than a minute faster than our practice runs. The adrenaline produced by a crowd of runners really helps! Next weekend, we're registered to run in the Hope In Motion 10K around Lake Merritt in Oakland.

The Half Marathon will be an impressive feat for both of us. It begins at 6:00 am on Sunday, August 31, and starts out with a 5K through the Magic Kingdom, under Sleeping Beauty's castle, then loops around Anaheim, out to the Angels' ballpark and back again, ending with a run through California Adventure Park and Downtown Disney.

When we finish, walking or running across the finish line (after maintaining at least a 16 min/mile pace, very slow if you do the math... something I must learn to do!), we'll receive a very cool medal, a t-shirt and goodie bag. There will be Disney characters along the route to cheer us onward and places to take our picture under the castle, etc. Our only goal is to finish the race, still standing and side by side.

Each August we venture back to Disneyland. This is usually one of about four trips a year, but it may be one of the most special trips as it is the way we celebrate our anniversary. This August, we'll have been married four years. Four years already! Amazing. Our relationship as husband and wife has morphed continuously since our beautiful wedding day, 08/14/04. Each day is about a new discovery, a recommitment, maintaining a stable home. And, as our honeymoon took us to Disneyland and then to Disneyworld, what better way to celebrate our union than to visit again?

Remember, we always remind each other as we cuddle beneath the fireworks bursting above the castle in the night sky, dreams do come true.

Running with Jonathan has been a dream come true for me. It's made us healthier, stronger, and has given us the opportunity to encourage one another daily. After the 8 miles on Saturday, we gave each other a high five and a kiss, and nothing could have felt better than hearing the other say "I'm so proud of us, so proud of you."

Today, after only a couple of months and a few mini victories, I can call myself a runner. This achievement has made other goals come into sharper focus, too. And I know that I'm not the only one who has dreamed of doing something entirely new. Don't ever tell yourself it can't be done. Rather, go out and take a hold of your dream. Grip it as hard as you can and then, even if there is time and effort involved, make a plan and stick to it.

My only advice after that big step would be to, if at all possible, sign up your true love and/or best friend to take the journey with you. Accomplishments are more fun that way!