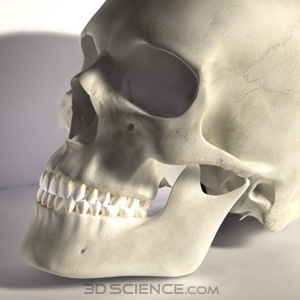 At first you may recoil at the sight, succumbing to the childlike fear of ghosts and ghouls and zombies, a reluctant-to-depart spirit haunting the blank, dark pockets which once housed eyes. Then you give yourself a shake. There is nothing to fear, you think, and the thought whirls in your brain, setting the synapses firing and triggering memory and emotion.

It's hard not to remember that the cranium of the object on the table once shielded a brain, too.

This is ridiculous! The thing in front of you is white, lifeless. Ruthless and sharp, perhaps. But dead. Very much dead. And available for study.

So, you move around the skull, taking calculated steps and copious notes. You are overwhelmed by the bones, the sheer number and intricacy of them. Parietal, Occipital, Temporal, Zygomatic. (Zygomatic, you think, is a funny, hardcore word for "cheeks.") Or perhaps the erratic sutures that fuse the back of the skull, winding canyons in the bone, like miniature Amazons and Niles, give you a thrill. Lamdoidal, Saggital.

There is poetry in the orb of the skull. It is the moon rising, the round howl of the Werewolf, simplicity, the egg of conception and birth.

But really, if you grasp at the kite string of your imagination and tug it home, reminding yourself that this is one skull in one room and you are meant to observe it, literally, and ignore the metaphors that combust around it... there is nothing remarkable about this skull. No, it is bleach white. It includes all the parts. It is plain.

The perfection of the teeth takes your breath away and you are suddenly down, on your knees on the floor, at eye level with the thing. Certainly, this specimen is worth preserving if only to serve as an example of excellent dental hygiene.

What you wish you could brush aside, even as you are astounded by the smile of the skull, is that the entire, complicated structure belonged to someone once. An eighteen-year-old Jewish man, in fact. (I'd refer to him as an eighteen-year-old Jewish boy, but somehow the semantics really do render such a sentence too pathetic to go on... and I must go on.) Before the skin was boiled away from his face, the man played soccer and practiced calisthenics. He was, rightfully, proud of his smile.

The ladies loved it, too.

Who can blame the doctor who examined this man, a picture of vigor, and then strapped him down to a table and injected gasoline straight into the fiercely pounding heart?

Lord, what a hideous thought.

A concrete slab was the operating table, the surface of it deeply scored to allow the blood to drain most efficiently, most cleanly. Did he struggle? Did he scream? And what must it have felt like for fuel to be pushed through his flesh and into the muscle of his heart? How instant was his death?

Perhaps Dr. Aribert Heim was so enraptured, so bewitched by the breadth of the young man's shoulders, that he felt compelled to break his patient into pieces. Perhaps he had an hypothesis. Perhaps he considered curiosity the pinnacle of humanity.

Or is it the ability to stifle one's own curiosity and compulsion for the sake of his fellow human being the essence of humanity?

Herr Heim dissected the aforementioned young man. He pried back the breastbone and removed the heart. He diced the kidneys. He performed a castration. He performed a decapitation. And once the glorious head was free of the spine and its now unneeded nerves, the doctor placed it gently in a pot of boiling water and allowed the ferocious heat to bubble and split the skin, allowed the skin to recede from its roots. There's a chance he went out to lunch while he waited. And upon his return, the doctor cautiously removed the clean skull from the water and set it on the table.

That's where you found it. Does the air smell of bleach?

Of course not. This skull and its story are 67 years old. The skull's owner, a nameless Jewish man, was one of hundreds who unwittingly went under the knife of one Dr. Aribert Heim, a Nazi physician who spent several months at Mauthausen, a concentration camp near Linz, Austria, developing faster techniques to implement genocide... gasoline injections to the heart being one of them.

Here it is appropriate, though shocking, to note that Dr. Heim is suspected to be alive and kicking at 93, fully in possession of his own precious skull. His name is at the top of the list of most wanted war criminals, having been convicted in 1979 of hundreds of counts of murder. Herr Heim has never been caught. He is believed to be in Chile at this exact moment (coincidentally, the country of his daughter's last known residence).

Today, Dr. Heim is being doggedly sought by Efraim Zuroff, an Israeli-American historian known as the "Nazi Hunter" who has been bringing war criminals to justice for 28 years.

If you wonder whether it's worth the effort to find and punish Dr. Heim today, as he is 93 years old and most likely approaching death's door on his own... if you're asking what it would accomplish to execute an elderly man who has been haunted by his history for decades, ostracized by the world (including his own son)... take one last loop around the table and consider the skull.

The hinge of the mandible should be of particular interest, for it would have rotated forward, allowing the victims firm, pink lips to part, the muscular tongue to stretch, the scream to escape from the cavern of his chest.

And this is only one skull which took part in one scream among many thousands.

Lift your hands to your ears and press hard as you leave this room.

I wish you luck with the forgetting. And I pray that Dr. Heim never will.

The complete news story can be found as reported by NPR .