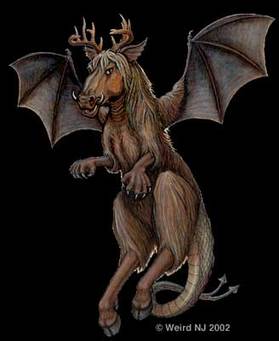 While it is sometimes true that the mind of an author is like a garden, constantly sprouting and nurturing new ideas, blossoming and brimming with possibilities, this is not always the case. Other times, a different type of creation takes place. An idea bubbles in the mud of the author's mind, and it sits there, fizzing and festering. From that idea, one may be able to ferment at story.

But if the idea is left alone long enough, denied by the naïve author's mind because it isn't sweet or pretty, it will rise from the brine as an ogre she never dreamed she could conceive. And at that point, it may be too late to find a constructive outlet for her creation.

As actor Daniel Day-Lewis (of Last of the Mohicans fame) once remarked on his process when preparing for a new movie role:

"In those quiet months before you approach the dreaded beast, you begin to enter into a world that isn't yours. People are always reading some sort of craziness into that, but it seems logical to me."


The dreaded beast. My newest story seems like that to me. Limitless potential on unfamiliar terrain. I am hoping that I can remember how to conjure the Pioneer Spirit, something to which I had constant access as a child. It's the only way I'll ever be able to put this writhing, rolling monster into print.

One moment It is a mountain piercing the clouds. Then, all at once, It is human, or something more holy and radiant but deceptively human-like. Another second passes, and I'm staring at the Occult, something superhuman, resembling religion. Perhaps those are synonymous. And if not, will God forgive blasphemes long enough for me to discover the truth behind my mind's wanderings?

I am small compared to my subject. In fact, I don't know that I can define the subject yet. That's part of the fear. What happens if I cannot ever see the big picture? My imagination swirls in like a storm and I must choose to fight or flee. The Imagination itself can't kill me, but losing this battle again and again, the failure at the very least, to harness the energy of this new wind, that might just do it. Surrender.

Weeks ago I saw the "dreaded beast" hunkered over the fresh kill of another, faceless author. Before I could think to run, the bloody-jawed thing had noticed me, too. He was not hungry enough to hunt me then, and instead he went to sleep in a stand of blue-grey cedars. Since then, I've been creeping past him, negotiating a flat, sharp precipice, mouthing prayers to the sky and refusing to look down into the thousand-foot gorge below me.

Yesterday was the turning point.

He woke and lumbered onto the ledge, blocking my only hope of retreat. I can forge ahead, hope that running out on this dream again won't lead to my destruction. Or I can think up some armor, a weapon composed of spikes and steel, and brawl with the beast until one of us lies dead. (That's a tad hyperbolic. I don't want to kill him anyway. Just win. Expose his throat and have the option. That's all I want.)

The standard-issue human in me does not want to die. But the fluttering, optimistic fairy, the one who has urged me this far and planted words in the garden of my mind when I thought the ground had at last gone barren, will not let me run up my white flag.

No , she says, Man-up. Use every tool you already know. Austen and Dickins and Emerson are on your side. They've gone toe-to-toe with this creature's older, bigger brother, and they've dominated in the end. You have the strength. You have the energy. A few deep lacerations won't hurt you a bit.

I'd smack her, but I have a feeling that behind the opalescent blue wings and silver braids, she might pack quite a sting.

So here I am on the ledge, blockaded by the "dreaded beast" and being taunted by my own personal fairy. Here's hoping I can choose my next step wisely and succeed before the men with the white coats and butterfly nets finally track me down.