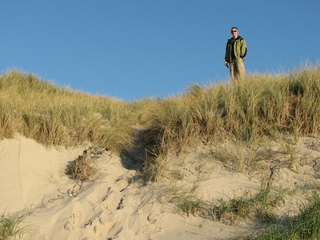 The Denmark border is indicated by a series of crossing kiosks which are no longer in use and by several proud, colorful flags. The first flag is the red and white national flag of Denmark. I love this flag. I would have jumped out of the car, pulled it down and made it into a shirt for myself if I hadn't been afraid someone might have taken it as an act of war.

Honestly, though, I can say that I was not afraid even once in Denmark. The Danes are wonderful people. They smile quickly, speak English fluently and without disdain or reproach. Had I worn their beloved flag around town, they probably would have patted me on the back and urged me to take it home.

Denmark is a lovely country. We geocached our way north, just to be sure to find a few unique nooks and crannies. This whole trip has been a whirlwind; more than 24 hours has been invested in the "getting there." So much driving (I'm in the car on the way to Frankfurt right now). Geocaching has been the perfect distraction.

On one such stop, we wound our way along dirt and gravel roads, out past dairy farms and corn fields to find a cache placed near a WWII bunker, a concrete box with two doorways. This was used by Nazis during their occupation of Denmark (a country which remained "neutral" at that time). The line of bunkers and manned posts stretched all the way across Jutland. Had we not searched for this cache, we would not have had the chance to see a piece of Danish history up close. In Jonathan's case, he got to walk all the way through it. We left just as the dairy cows came home.

Our first destination in Denmark was the hamlet of Klegod, located on the western most fjord just south of Ringkøbing. We had been invited by a friend to use their summer house in this place, settled on the leeward side of the sand dunes and within walking distance of the beach. The geocaching did backfire on us a tad when we arrived at the house in the dark, something we'd been warned against by the owners. While our Google directions were excellent, we were turned around in the dark and ended up at the wrong house. Thankfully, no one was home as Jon played around with the front doorknob, a headlamp gleaming from his forehead like a bright, scary third eye. 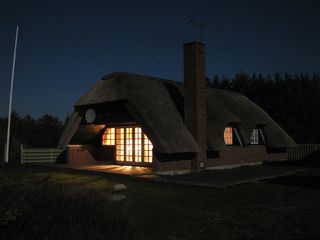 We gave up on the brick house and gave the place across the street a shot. It worked. We were in. The house was perfect. Three little bedrooms, a bathroom, a kitchen, a living room, a deck, a yard, a garage. In the daylight we could survey the traditional thatched roof and blue paint job. It fit. A house on the sea shore. I had an immediate urge to build sandcastles and roast hot dogs at a beach bonfire. The nights were cold, but we had down blankets and each other to keep warm.

The wood-burning stove was the only blemish on our stay there. He was our nemesis. From the moment we walked in, he gave us the cold shoulder. He snorted at us in a language we couldn't understand and refused to nod or use hand gestures when we tried to warm him up. Nothing worked. Not the compressed sawdust bricks, the kindling, definitely not the piles of wood we purchased at the store down the road. The little jerk just laughed and smoldered at us, the bloody intruders who were disturbing his alone time.

Our final answer was Duraflame. He couldn't argue with that. Bested by the cheeky Americans and their synthetic fuel!

I mentioned in an earlier post that we convalesced at this little house, and that's absolutely correct. We rested, rejuvenated, repaired. Jon read and I wrote. We ate cheese and crackers, took showers, walked on the beach. We played games of Rummikub (which I won) and watched movies on my laptop. Thankfully, Indiana Jones can be appreciated on the small screen. He's THAT good. 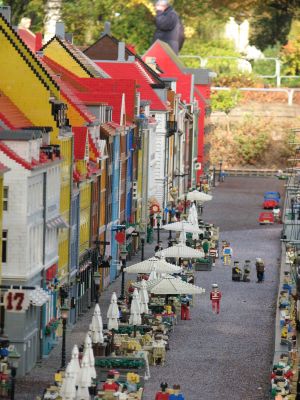 And Ringkøbing became one of our new favorite cities. Tons of little shops. Bakeries and cafes and restaurants on every corner. Brick buildings lining every street. We shopped and enjoyed the sunshine and the general friendliness of the people. I even sent some postcards on Friday! They probably won't make it back before we do... but, it's the thought that counts. And until our day of rest at the summer house, we hadn't had time to write the postcards anyway.

There was a lovely restaurant between Klegod and Ringkøbing in a town called Søndervig. Terribly expensive, but the beef and chicken were delicious. I savored every bite of something that strongly resembled potatoes (I was afraid to ask what I was lapping up that day... just in case...). For dessert we sampled some traditional Danish pancakes served with ice cream and raspberry sauce. Oh, we floated home that evening.

Day two at the house, we took a day trip to the original Legoland. Jonathan's Mecca. It was well worth the visit. Beyond the rides, there was a whole collection of scale models of cities and famous spots from all over the world. My favorite was the recreation of Copenhagen's colorful harbor. I hadn't been there yet, and it made me look forward to the next part of the journey all the more.