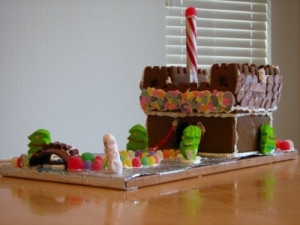 This weekend I was given the opportunity to wear my favorite new holiday skirt twice. That's right. Two separate holiday dinners. Awesome food for free, twice! But the high point of my weekend was the way Jonathan and I spent our Sunday afternoon.

Weeks ago Jon was reminiscing about the gingerbread houses he made as a child at Christmas time. They became bigger and more elaborate as he got older. About the time he turned 13, he went all out and built a gingerbread version of the Transamerica Building. Understanding how serious he took it then, imagine how he is now...

Actually, we had a wonderful time designing the castle. Camp style.

That means we took our time. Sketched out different elevations, floor plans, brainstormed the decorations, cut out templates... and our idea came to life. We bought a ton of candy, made a ton of gingerbread, a ton of royal icing. And it worked! Necco shingles, Life Saver glass windows, gum drop fences and paths, licorice whip chains on the drawbridge, Tootsie Roll bridge, marshmallow snowmen and Christmas trees.

Aside from the massive sugar high that left both of us shaking, it was awesome. I've very proud of Camp Castle!

It's been a wonderful weekend. Friday night I went to see the Cedar Grove Community Church production of the Best Christmas Pageant Ever (the little girl who played the narrator was spectacular!). And on Saturday morning Jonathan surprised me by whisking me over the The Vine to see a one-time showing of A Christmas Story on the big screen. That was a really neat experience. The actors who played Randy, the little brother, and Flick, the best friend who gets his tongue stuck to the flag pole, were there to do some Q&A; with the audience! Really funny to see them all grown up.

So, we packed another weekend full (when we really ought to have been relaxing). The good news is that, even though we're exhausted now, we leave for Disneyland on Thursday. And when it's time for us to come home and leave Cinderella's Castle down there, we'll come home to a sweet castle of our very own.