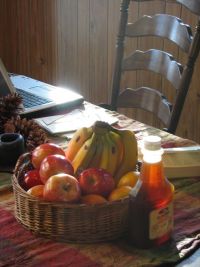 October began for me in the mountains. I woke up to the sounds of friends in the kitchen, friends working, friends packing up to return home. Today was the final day of the annual Tri-Cabin trip we've been attending for several years now. And while we may have eaten wonderful food (those enchiladas were fantastic!), and while we may have played Carcassonne, darts and ping pong until we were exhausted, it was the quiet moments I treasured most at the end of the day.

I watched the wind tickle the trees, fumbling between the branches and rushing to me from the depths of the sky, sounding like God breathing. Here and there were red leaves, shy and outnumbered but prepared to catapult into a fiery majority within the next few weeks. The evergreens appeared fearless in the face of impending change. They are strong and staunch and beautiful. When a pine cone released its grip on a branch 50 feet in the air and plummeted to the ground with a resounding crack, it rolled under a nearby bush to consider the delicious feeling of the only free fall it will ever know. I held Jon's hand, his long, warm fingers tightly locked with mine, and felt small but safe, and lucky, too.

Noel attempted M&M; pancakes. Dave tried to remove splinters with a razor blade. Stephen beat me at Sorry! Debbie asked Jon if he wanted to change a diaper, and I don't believe I've ever seen him look that scared. Little Madeline wanted "My Country Tis of Thee" as her "night-night" song, and the whole crowd of us sang it to her. When we'd finished and had begun laughing at ourselves, Steve turned to me and said, "This is the weirdest party I've ever been to."

It was noisy. Laughter rolled like a psychotic snowball down the stairs into the basement, increasing in size, speed and momentum, crashing into us and distracting from our game of darts... but in a good way. We'd pause, lower our darts, and catch snippets of conversation completely out of context. "It's Japanese art-ish." "He ate the beer bread for breakfast." "I need another white one." They meant nothing and yet they were followed by gales of fresh laughter.

Between the craziness, though, I had a chance to settle into a couch corner and read. Pam Houston's words soothed me like a mighty, tender, truthful lullaby. Allowing her to do everything and then to tell about it, while I nursed my aching muscles and pounding headache, nudged me into a very relaxed place. She shot rapids, climbed mountains, came face to face with a bull moose, fly fished in the freezing cold in the dead of night.

And at night we crawled into bed and clicked on the electric blanket. Everything was so cozy. I didn't want it to end.

There is something about this cabin I've been to a handful of times that makes me feel warm and welcomed. Maybe it's the green shag carpet or the brown linoleum kitchen floor. Or it could be the way every corner of the place is filled with memories, a stuffed marlin above the entrance, a quilt, family portraits, weathered books and pieces of furniture so well used they have expanded and hunkered down into the perfect spots to think, read, relate, fellowship, rest. And beyond all of that are the mountains that guard the sanctuary, a few friendly, blue and gray peaks fuzzy with evergreen trees. More than anything, they welcome me.

(*The Camp Syrup is in the picture, but you can barely tell what it is... so I'm creating another footnote. Hooray for footnotes! A double hooray for Camp Syrup!)