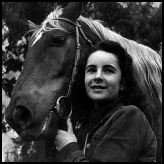 On the bed I share with my husband is a blue-edged quilt that has been washed enough to fall in soft folds when I kick the covers back in the morning. As a little girl I dreamed of waking to the throaty, inevitable crowing of my own bold rooster and then, without hesitation, shedding the warm weight of a quilt before running out to do farm work. My quilt was pulled off the rack at a department store downtown. It is one of a thousand identical quilts. And never have I risen to the call of a rooster.

But I can't forget those girlish dreams, the way I considered how a wrought iron weathervane might look atop my family's town home. I pondered the amount of milk produced by the single Holstein cow. I studied up on my Quaker ancestry when I watched John Wayne abandon his life as an outlaw for the peace and grace of Gail Russell and her Quaker family's farm ( The Angel and the Badman, 1947 ).

What is it about farming or life on a working ranch that appeals to me? It can't be the hours. Just making it to my 8-5 job in the mornings isn't easy. However, recently I've discovered the back route to Pleasanton from my side of town. It winds behind Springtown, out by the Rod n' Gun Club, way out where the feared "suburban sprawl" can't go.

The land back there is lovely, unblemished. In the spring it was probably green with dark pockets of valley and tiny flickering streams of runoff. Today it is gold. The yellow and gray grasses prove that even death is beautiful under the tough Livermore sun. Farms and ranches run along either side of the road where I can see lazy cows with red clips on their ears wandering parallel to the barbed wire. It is the horses, though, that catch my eye. Black, white, brown, painted, speckled, blazed, glossy, shorthaired, long-legged, walking, running, cantering, whinnying, snorting, playing, grazing. I want to ride one and run with them.

In high school I took a few lessons from a friend's mom. She was a tall, weathered woman in old blue jeans, and she was terribly deaf. I couldn't tell whether she liked me very much. But then, I couldn't tell if she actually liked her own daughter most of the time. Over the course of two months we met about five times, and with a lot of help I learned my mount, a fat, slow-moving mare named Kissyface.

I learned the curve of her back, the sensitivity of her flanks. Not once did I kick her. Only when prodded myself by my staunch, hawkish teacher did I squeeze Kissyface with my thighs. She twitched about the nostrils and picked up her pace, but never faster than an even canter around the ring. To these lessons I wore jeans from Mervyn's and one of my brother's sweatshirts. After fifteen minutes of running the brush over her thick skinned flanks, I was covered in horse hair and horse smell. But I loved it.

While other girls in the fifth grade were dreaming about boys, I was dreaming about horses. I absolutely believed that there was one horse out there for me, only me, with a soul I would understand and big, hazel eyes that matched mine. I had a named all picked out, too. And I won't give it up here, either, because I haven't given up on that dream. Even though Jon cannot now imagine nor desire a life that involves horses, I have faith.

After all, Velvet did find her Pie.