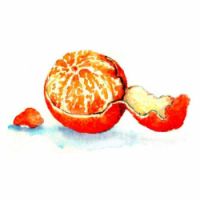 I wish, I wish, I wish I had the time to write something that I haven't been assigned. But apparently this quarter is all about the writing. I play volleyball and I write. I write, and then I play some volleyball. Okay, so it doesn't sound hard. And I shouldn't make such a big deal out of it. Due tomorrow are 10 (yes... 10) paragraph-long stories. Seriously, I was told to smush all my creativity into a single paragraph at a time. The good news: I completed 10 stories, 10 paragraphs. Now I'm tapped out. Couldn't dream up another plot if I tried. But, if anyone's interested... here's what I came up with.

I took a stab at remaining motionless, but she saw me from across the room, and came quickly at me. Perhaps she wanted to comment on my new haircut, or the uncharacteristically long hemline of my jean skirt. But I didn't think so. Her nostrils flared. I had no idea the living room was so big. It took her ages to navigate the couch, the coffee table that had been moved for a game of Twister, the Twister participants. Her eyes screamed, How dare you come to my party? How dare you drink my Smirnoff and watch my drunk friends play Twister? The trouble was, I had no answer. I couldn't remember what had possessed me to put on my party clothes, to 'forget' to wear a bra, and then to show up at my boyfriend's ex-girlfriend's party. I could run. There was still time. I sent a quick, slightly frantic glance over my shoulder toward the screen door in the kitchen. A moth was banging its head on the screen, trying to join the party. When I turned back, she was standing up close to me, sneering. I could smell her tangerine shampoo and the third rum and coke she'd washed down to get the guts to challenge me like this. She smelled good. The line she'd cut in the sea of people widened so everyone could get a good look. I tensed. A flood of light swung into the house through the windows and the roar of a car engine stopped all of us. Dead. She shot me a panicked look, dug her nails into my left arm, then vanished, along with every ounce of fight she had saved up for me, into the sea of frenzied kids, all tumbling towards the exit. I drained my drink, straightened my skirt, and headed for the kitchen, making sure to let the moth in on my way out.

Jacob carved his brother's name into the mottled brown surface of the tree, scarring the bark with his pocket knife. Carter. Tenderly he traced the word with his finger, removing any remaining sawdust. There, he thought, there is your mark on the world. Jacob stood up, unbending at the knees and waist, groaning quietly along the way. Leaving his brother's name on a tree was a small gesture, but it was the only practical thing to do now, with six weeks left of dust, potholes and heartache on the trail. From where he stood, near the biggest, broadest oak tree, Jacob surveyed the wagon train, his eyes skipping from one wagon to the next until they landed on his own, the one he had shared with his brother. Loneliness tore at him from the inside. Who would help him build his new home? Who would share his soup and bread, remind him to say his prayers? Jacob knew the answer to all of those questions. All of Jacob's dreams were laid to rest in that same shallow grave. He turned around again to the foot of the tree where he had dug the grave for Carter. Beside the raw mound of mud was another grave, gaping open. With blistered hands, Jacob leaned his shovel against the tree, gently resting it between the two names. Jacob and Carter. He stepped into the grave and lay down, staring up at the tree. The great branches waved above him, whispering and consoling.

Papa was kicking the dust off his shoes, slapping the dust off his thighs when I left the house. He didn't see me go, but he hasn't noticed me much since the gold gleam came into his eye. I don't know much about such things. But I know he wants to be rich. And that, when he strikes it rich, he wants to buy me pretty things, and make sure I don't have to scrub floors or skin rabbits anymore. I could still hear him dancin' in that cloud of dust as I went over the hill. July is so hot. A soul can't get a breath of air without swallowing a fly or worse. And Thursday is my bathing day. At the bottom of our little canyon runs the prettiest river; I go there as often as I possibly can. The sticky heat pushed me in, up to my knees. When I saw the gold, I gasped. There it was, sparking around my toes. Why hadn't I seen it before? More and more of it caught my eye, blinding me, deeper and deeper I waded. I don't know if it was the current or God smiting me for my greed, but I got sucked in. Now I'm splashing and flailing, but I can't get a word out. From somewhere, though, I could swear I hear Papa callin' my name. Clementine!

I've never been stood-up before, I think as I take a tentative sip of my ice water. Should I be drinking this water? If the guy never shows up, and I don't order anything else, will the kitchen staff be mad that they still have to clean the lipstick off this glass, even though they didn't get paid for it? Am I wearing too much lipstick? I consider the glass and the sticky, pink half-kiss I've left on the rim. I fiddle with the salad fork and breathe in the direction of the candle on the table to make it flicker. I'm being childish, I decide. I can eat alone. I have my pride. But the waiter doesn't come over, because he knows I'm waiting for someone. I made some cutesy, half-flirtatious remark about my date being late when I followed the waiter to my table. Why do I have this unmitigated need to talk to strangers, to tell them tidbits about my personal life? Five more minutes, I decide, then I'm out of here. The five minutes tick past, then six. I gather myself up, a miserable bundle of purse, evening wrap and crushed hopes. I pass tables of sympathetic people, oblivious children, one smirking waitress with a giant mole on her nose. The valet asks for my tag. On behalf of all of us here at Four Lakes Winery, he recites without looking me in the eye, we hope you had a wonderful dinner, and that we'll see you again soon. I close my eyes and sigh. This, I realize, is not the Lakefront Winery. I want to run back inside and yell, I wasn't stood-up! I was just stupid! But I don't, because this isn't Hollywood. I step into my car and drive across town, hoping my date is more patient than me.