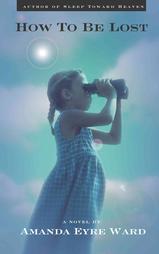 I have an author recommendation. And no, she's not one the authors I am assigned to read in my "boring" English classes at school. Amanda Eyre Ward was someone I'd never heard of until I walked into Barnes and Noble intending to buy another quick read late this summer. Her latest novel, How To Be Lost , caught my eye, and buying it was an impulse. But I couldn't put it down. In a little more than two days I'd dusted it off between the rest of my busy schedule.

When I'd finished the book, I was left wanting more. Something about Ward's prose is soothing; even if the content is also disturbing or graphic, the metaphors she draws are easy to see in your mind's eye. I appreciate her logic.

She also uses all five senses in her descriptions, often detailing the scent of a person or the texture of an item in the scene in order to most accurately get her point across. It always works, bringing characters vividly to life. They stand in front of you, breathing, wearing flannel and smelling faintly of cloves and cigarette smoke. Ward knows that her readers will attach themselves to characters they are allowed to know more intimately than usual.

Today I picked up an earlier book by Ward entitled Sleep Toward Heaven , and I didn't put it down until I'd finished it. Literally in the span of just a few hours I gulped down every ounce of the story. She amazes me.

Not only is her voice as real as a friend's or a neighbor's, but she refuses to write in a stale, linear fashion. Rather, she chooses several plot lines and alternates between them, giving each protagonist his or her own distinct expression so as to make the reader's journey with each very easy, and then she braids them together. At the beginning the three sides of the story are so disparate that one wonders how they'll ever come close to one another... and in the end Ward wraps them up, tightly unified, so they can't exist without each other. The movements are subtle and surprising. I love it.

But I think Ward's most important talent is her staunch, balanced point of view. Even in Sleep Toward Heaven , a story about women on death row in Texas, I could not feel Ward's own stand on the issue of corporal punishment. The tale itself is told through the life of an inmate, the life of a victim's widow, the life of a young doctor... and minor characters influence each segment with stories and experiences of their own.

Yet, Ward doesn't enter her own plotline. There is no ringing endorsement for the needle at the end... there is no proof of innocence after punishment is inflicted. Nothing. Her poker face is admirable, and it makes her work that much more valuable.

"I'd won a bet- my husband had bet me that he could make Priscilla sit still with a biscuit on her nose, but he couldn't. Priscilla kept snapping her head around and eating the biscuit. I won the bet, so he had to go buy the beer. 'Get something good,' I yelled, as he pulled the truck out of the driveway. 'None of that Miller Lite crap!' And that was the last word he heard from me: crap. I'm sure he heard some other words afterward, maybe a song on the radio, the price of the beer from the cashier. I can watch the tape if I want to find out exactly what Karen Lowens had said. But the last word he heard from me, his beloved wife, was 'crap.'"

To sum up, she's great. If you've got a few hours to spare... check her out. Rest assured I plan to track the rest of her writing down and read it diligently.