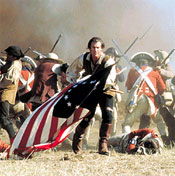 "Would you like a lesson, sir, in the rules of war?"

When a cruel green-eyed captain snarls these words at Mel Gibson in The Patriot, he is standing an arm's length away behind a carefully aimed pistol. And this is only moments after he has ordered his troops to execute every wounded enemy soldier on Gibson's property, and then to burn the house and barns, kill the livestock. What is his point?

There are no rules of war.

Fifty years earlier, a romantic comedy called "Dear Ruth" was a smash at the box office. Young, dashing William Holden played a war hero home on leave to see his girl. Cute movie. Along the way Ruth says to him, "Bill, you're not being fair." His reply?

Okay. So where are we? Oh, yeah. There are no rules of war. Or are there? Or should there be?

Should civilians be off limits? Should prisoners be fed? Should torture be used in the interrogation process? Should we be allowed to get angry when these tactics are used on our citizens and soldiers when we're fine with using these same tactics on our enemies?

A few days ago the Australian press broadcast images of American troops setting the bodies of slain Iraqi insurgents on fire in the street. And it's been over a year since the images of Abu Ghraib prison leaked. What are we doing?

Responding. For months we watched hostage after hostage, civilians from many countries, beheaded by radical terrorist militant groups... proudly, defiantly. Our people, American citizens with families, were unsafe. And so Iraq's worst individuals taught us about the rules of war. Those intangible and seemingly non-existant rules.

But I don't think that reaction is justified. As angering as the terrorists' actions are, and as much as they evoke an animal rage within me, I hate to see our boys resort to those measures. I hate to see them sink that low. Because eventually, when those who make it home are home, and they sit back and think it all over, that will be something that haunts them. The self-defense killings, the inevitable collateral damage, will all balance out because our flag will still wave overhead. The acrid smoke and the stench of burning flesh and the hellish flames dancing on and in the bodies of the dead they have burned for bravado or as bait... that will never balance out. Instead it will hang in the minds of the men who committed the act, at an odd angle, never to be forgotten because they will wonder at its necessity.

Or, worse, it will be forgotten. And in the wars of the future the list of rules prohibiting crimes against humanity will diminish... becoming the "all's fair" and decreasing the gap between us and the barbarians of our history and our present.

I'm not saying that these dead men set ablaze don't deserve this treatment. The evil men who beheaded the hostages, the men who flew planes in the World Trade Center and all who commit these kinds of atrocities world-wide deserve this much and more. Still, we need to remember that this war isn't about what they deserve. It's about what we deserve: a better, safer, more tolerant world.

We curse Saddam as he sits smug and clean in a chair in a court half-way across the world, and as he proclaims that he is still in charge. We want him to pay for the massacre of more than a 100 innocent men, a whole town. And we want him to pay for more than that, too. He is evil, we say; he is inhuman. I say that, too. But we can only continue to look down on Saddam, call him those names and believe we are just when we sentence him to death, if we refuse to operate on his terms.

When we begin tormenting and torturing prisoners and defacing the bodies of the dead, then Saddam is right. He IS in charge. We're no better.

Playing World Police isn't easy, and it's probably not even a job that most of us want to focus on. Our country, after all, could use a little domestic overhaul. Still, the sucker punch we received on 9/11 akwakened a terribly patriotic beast. It was vengeful, our reaction, at first. Now it has become more, though. The idea of ridding the planet of terrorism entirely is an ideal one. It may even be impossible. But it remains noble!

That's our trump card. In a world that hounds us for our Shock and Awe Campaign and our bombing of Afghanistan and Iraq, we stand apart and alone... but tall, a head above the rest, because we're willing to refuse to be bullied, and we're able to stand up for those countries that can't afford the luxury of that stand on their own.

In the end, however, and as always, our victory must also be principled. We must be able to say that we did all we could to make this world better. Ridding the world of terrorism doesn't mean anything if we only become terrorists in the process.