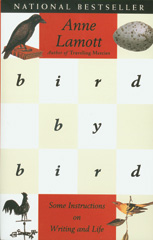 Anne Lamott is a wonderful author. Her book "Bird By Bird" has been a blessing and a relief to read more than once. And she inspires me. Which is her point in that book. She's out to make us who claim to be writers... write!

I made all sorts of excuses the last time. I couldn't be too inspired because I was in the midst of my broker's class (which, as any reader of mine can attest to, isn't great for getting the creative juices a-flowing). Now, however, my summer is ending. I'm coming away with many new experiences and qualifications as a person, an adult, a wife, a friend and a daughter. As a writer it's time to get my butt in gear.

One strategy Lamott suggests for those of us who are prone to "dry spells" is the idea of Inches. Sit down and write just an inch. Or three inches if you're feeling slightly less than completely empty. Surprisingly, an inch or two can become a page in no time. It's a jump start. I've tried it before, and it always works for me. Not that I'm penning novels here. But my time isn't wasted when the product of an hour is a memory made tangible and set down for posterity, or a plot begun, or a character born. Tonight's harvest wasn't anything out of the ordinary, but I thought I'd cheat a little and place it here.

These inches lack purpose, commitmet, resolution... every key element of good writing. But I focused on the language, and it felt great! Like a workout for the brain. Let's hope I remember this when I feel plum tuckered mid-quarter.

When I first sit down my memories come too fast to me, choking my brain with images and sounds: a loud girl's voice, a black bruise on my hand from punching a tetherball like a maniac at recess, the pool water sloshing up over the edge after a perfect cannonball, someone touching me when I wasn't ready for it, the horrible tug in my mouth when the dentist had to extract the countless, stubborn baby teeth that clogged my smile, the smell of pipe tobacco floating to me as I passed an old man taking his daily constitutional, the flapping and buzzing of a baseball card fastened to a bike frame with a clothespin...

Childhood? Mine? Perhaps. Or are they all braided in with the stories I've heard and the books I've read, the movies I've seen, my imaginings? I can't tell sometimes.

It's the possibility of fiction that allows me to consider this past. I don't fear it. Not like those unfortunate people who were starved of affection or lied to or beaten or humiliated or rendered impossibly ill. What shall I do with all my material?

On the edge of my bed sits my mother. She smiles at me and listens to my wild stories about school and my friends. Her long, warm fingers play absently with the laced edge of my violet comforter, worn with age and infinite washings. I watch her fingers move like a happy, nimble spider, catching the white threads and pulling, twisting, smoothing, stretching.

There is no scent or sound other than her breathing, always deeper and more calm than my own. When she rocked me to sleep I would try and match her breaths, the slow intake and pause. But I could never quite achieve that match. I'd give up.

And then she'd sing to me. I loved the songs she chose, favorites from her own childhood, sung by her own mother, a grandmother I'd never had the chance to meet. Deep maternal tones ran beneath the silly, meaningless words. My child heart was soothed into sleep.

Years later, when I was away at college and jerked from sleep by a nightmare, I sometimes wished I could call and hear my mother's lullaby again.

Water snagged my clothes and sucked me down to the sandy bottom of the lake. I was caught in the undertow I'd been warned about by my uncle, just before I swam too deep. In the murky darkness I couldn't see the terrors I were sure were all around me; I could not breathe; I could not find up.

But if my life flashed before my eyes, I didn't see it. Seven years would probably just be a blip rather than a flash anyway. And as my lungs burned for air, wooziness overtook me and I released myself. It was after the struggle stopped that I floated to the surface, a mile down shore from my family having a picnic on the beach.

When I dragged myself onto the dry dune to catch my breath, I had to think. Did I almost drown? Was that what 'almost drowning' was like? Or would this be another exaggeration on my part? Discreetly I attempted to empty my magenta bathing suit of the sand that it had collected during my escapade. How embarrassing.

I decided that I was simply a lousy swimmer. No need to hear my parents explain again how outrageous my imagination could be sometimes.

There was a lovely, normal woman who lived across the street from my family when I was growing up. Her hair was especially curly and honey blonde, and her smile was a bit pearly. I thought she was beautiful.

And she was raising two beautiful children. Even if her son was a tad arrogant and her daughter a little spoiled. She doted on her husband, always smiling at him. It was always the same smile, it seemed. Practiced, measured so that she'd have the energy to do it all day long.

We watched her homeschool the kids, be the perfect 'team mom' at little league games, style her daughter's hair every morning like a little doll, cook oodles of goodies for the neighborhood bake sale, do aerobics at the community center... the list went on.

She was religious, too, a devout Mormon. But any and all discipline was deferred to her husband, the man of the house. After a while she seemed to me a shell of person, a sad shell of a person.

It still shocked everyone when the family woke up one day to find her gone completely. No word. Just gone. And there was nothing lovely or normal about it.

Rumors abounded, of course. If they were true she was living in Seattle with a photographer who went by only his first name; she was his model, his muse. Or she'd gone back to school and was studying dentistry. Or there'd been a secret intervention and she was currently in a very high security rehabilitation facility on the west coast, where her roommate had once starred on Beverly Hills 90210.

Whatever the case, her family didn't appear to miss her too much, though her son barely made it through high school and her daughter developed a call-for-a-good-time reputation.

I remember watching the woman's husband after she'd gone. He'd been distant before, more assured. In her absence he reached out to anyone and everyone. I was proud to see that he was answered.

My dream began on a hilltop and ended in a gritty alley behind a grocery store where my family shopped weekly for many years. It was never me in the dream, though, just a girl's body detached from my urgent thoughts.

She walked down the steep side of the hill, stomping to break the momentum, but her feet would begin to wheel too fast and she was swept downward out of control. I never noticed the view from the hilltop, just that she was above something and I was too busy trying to get my thoughts through to her and protect her.

Exhausted she would wander at the bottom of the hill through a phony looking town. Bright storefronts and empty windows, like a set for a play that someone had wheeled onstage just moments before the curtain shot up. No curtain, though, just a straight, narrow road to nothing.

She stopped abruptly and turned left into an alley I hadn't seen before. In the alley she died. I felt the death, but not the pain. There was no watching or seeing or hearing. It felt like a tightness was unbound in my chest, but I don't believe I was her soul, because I didn't float away. It was just the body and me, which was no different except that something was missing. Life probably.

I studied the way she lay crooked on the ground, like a broken bird fallen from her nest. Long, red scratches had appeared on her wrists, but I could never decide how they had been inflicted on this girl who was not me.

She could not have been me. Mostly I think this because I felt no sadness when she died. Until I tried to leave the body, I wasn't afraid either.

But then I was stuck. I only tried to leave once, I could see the brightness of the street at the end of the alley, but it was no use. In fact, the certainty with which I knew that leaving the body was impossible kept me from fighting. That's when the fear set it. The alley was darker, the street further away, and the body distorted into everything horrible.

My insubstantial being yearned to wake up.

His breathing is soft, like the skin at the nape of his neck, covered with a curl of dark, soft hair. I count his rhythm and think about eternity and what he might want for breakfast when he does wake up, which is always after I do. Never, in this early morning moment of study, do I move unless absolutely necessary. His waking is inevitable, but when he sleeps he is a little boy angel, fearless and undaunted by the world, hopeful, trusting, unblemished. For that second his history is suspended and I see nothing but the beauty of a good man who is mine. I love him. Then I notice that his eyes aren't entirely closed. I can see them, blue and sleepy beneath his lashes, but definitely seeing. I blush. I've been caught. But, in fact, he is studying me, too. Quickly he shuts them again, as if I might not have seen him peeking at me, and allows me to continue my contemplation uninterrupted. Why not? This game continues until it becomes absurd, the sincerity of my study is lost when I begin making funny faces at him when he peeks again. His eyes open and, unbelievably, I love him more.