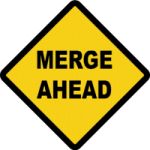 "Come here!" Exclaims Chandler as he grabs Monica's hand and pulls her to the entrance of their bedroom. "I have another great idea!"
In this episode (a classic) the two best friends have fallen in love and have decided to move in together (setting aside my personal aversion to the idea of "shacking up"... ). And here they have reached a pivotal moment in the new phase of their relationship: combining themselves. In fact, just moments before, Chandler has triumphantly been a witness to Monica's compromise to allow his favorite, beat up lounge chair into her OCD-level perfect living room.

Successful relationships are all about compromise. I, a proud member of what I consider to be a very successful, blossoming relationship, have learned a lot about the concept of giving and receiving to achieve balance. That's no secret really. Anyone enters our house and can see the fruits of our labors of love, catering to each other, bargaining for the sake of peace. Examples?

On our bookshelves one can find the essence of each of us mixed together. The Complete Poems of Emily Dickinson leans leftward onto Hacking Windows 2000 ; Nabakov's Lolita props up The Eloquent Jacqueline Kennedy Onassis with the help of Yosemite Valley Free Climbs ; The Far Side Anniversary Collection is at the bottom of a stack that includes Fredrick Douglass' Slave Narrative and Stranger In a Strange Land by Robert Heinlein. Our library has boomed and become more ecclectic simply by marriage.

It's the same with our art. Jon's fractals flank the walls behind our bed. Those face a wall graced by a sweet Norman Rockwell print of an engaged couple filling out their marriage license, circa 1950. Our giant Disney attraction posters brighten the loft, and downstairs a lovely portrait done of us on our wedding day by Jon's mom is displayed above our fireplace. Vintage Coca-Cola signs adorn the kitchen, but Escher's startling, confusing works in black and white are scattered throughout the house.

And speaking of black and white, the decor of our home in general is a perfect example of our fusion. Jon, when I met him, was all but anti-color. Not that you'd have known it as he pulled up in his bright red Jetta. That was a phase apparently. It's like pulling teeth to get the boy to wear clothes that aren't a shade of gray, black or blue. I, on the other end of the spectrum, love vibrant color! Red is my favorite, obviously. So when we set about decorating our home, compromise set it big time! I gave in on the "blue towels" in our bathroom as long as our kitchen could be a cheery, cherry red. He bargained for his black couches by offering me the guest room to decorate as brightly as I wanted to (here I will admit that between the periwinkle and the teddy bears, color and I ran amuck).

We meet in the middle. The movies we watch are almost all my choices. Jon is very tolerant of my love of the classics. Tonight we watched "Dear Ruth", a darling romantic comedy about two people who allegedly met through the mail during the war... too much can be given away even in a brief synopsis. Not that anyone is planning to hunt this treasure of a movie down... but it IS worth it. Anyway, he bears and often ends up enjoying my movies. But I truly can't stand his choice of TV. The Simpsons? Really? Occasionally I'd cave and sit for forty minutes of an interesting History Channel production on the building of the Alaska Highway or the inner workings of the U.S.S. Ronald Reagan, though. That counts.

One of the most amazing ways we've learned to compromise, though, can be found in our travels. Disneyland is the perfect place for both of us, meeting all the needs of our curiosity, inner-children and romantic dreams. But not all our destinations are like that. We both love to camp, though Jon prefers being as far from the next living soul as possible and I prefer the security of an organize camp ground (electricity, plumbing, drinking water, fire pits and neighbors). We both love seeing nature's beauty. I, however, would rather walk 20 flat miles in a secluded valley, while Jon's primary urge to conquer the highest mountains and navigate the steepest trails.

The treasure at the end of the rainbow is the same: a gorgeous lake or untouched miracle of a meadow. We sigh as one. So, when it comes time for a Yosemite trip, we give one day to Jon (let the trekking begin) and one day to me (reading under trees, exploring neat lodges, actually visiting the Visitor Centers). Our system has worked well so far.

Tonight I folded the laundry, something I do because I hate to clean the kitchen (and Jon cleans the kitchen because he hates to fold laundry). Every day we do a zillion different things, large and small, conscious and subconscious, important and trivial. In everything we do, though, we can find some fragment of compromise. It's the essential ingredient, holding a batter that would be too liquid otherwise together (not because I'm the one cooking, but because a relationship without mutual sacrifice and giving is an absolute mess).

Still holding Monica by the hand, Chandler spouts out his "great idea". "You know those big traffic signs that say things like 'Left Land Ends, Please Merge'?" His loving girlfriend gives a tentative nod. Where is he going with this? "Well, we could get one of those signs and put it up over our bed... because that's you and me!" She's confused; he's elated. Joyfully he cries out, "MERGE!"

Although Monica hits the punchline dead on with an equally enthusiastic and animated, "NO!", I think her reply is unrealistic, shortsighted. If Jon wanted to put a giant, ugly, yellow road sign above our bed, I'd probably agree to it. Of course he'd have to let me put that yellow and white flowered quilt and matching decorative pillows on our bed...