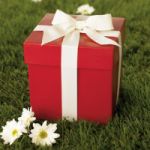 So I Googled the word "red". Bored? I was, too. Anyway, I googled my favorite color in text form... and what came back was a surprisingly long list of different things. What surprised me more, however, was how many I'd heard of/utilized at some point in my life. Confused? Let me help you.
A few of the top results were:

Red Hat- Open source computer code, linux based (if this sounds even remotely correct or intelligent, thank the hot techy guy I married).

American Red Cross- Thrice I have given them some of my blood.

Red vs. Blue- funny compilations of graphics, music, dialog and music that utilize scenes and characters from the X-box game Halo

Red Lobster- seafood restaurant that I, for some reason, equate with Sizzler (not necessarily a good thing), and for about six years now I've had a gift card to the place in my wallet. jon is not a fan.

The Red Green Show- Dry humor, weird skits, old guy with a husky voice who picks on a wimpy guy with some kind of accordion device... and yet my family always enjoyed it

Red Dragon- Scary sequel to Silence of the... can't even finish that sentence without cringing

Red Eye- Scary movie that Jon and I saw on Saturday. Ruined the name Cillian (pronounced kill-ian... which became ironic as we watched the film). Good, but slashy ending.

On that note I will end this extremely pointless entry. You see, I felt this site was turning into more of a journal than I had originally intended. And, on top of that, I really wanted to write at least two nights in a row. So, after a relaxing evening dining with my husband and my friend, Cindy, at an unassuming restaurant in downtown SJ (yummy pasta!)... I had to think of something. Forgive my ramblings. Be glad I didn't supply links to some of these sites. Who knows where that would have led, right? Tomorrow I'll try to have something more purposeful worked up. Until then... those of us who are about to sleep salute you.