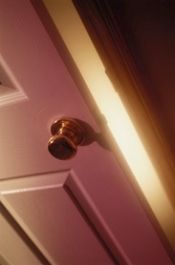 Suddenly my blog has a name. It was Jon's idea first, I admit. And I love it. Accuracy is important here, especially since the only readers right now are Jon and me, and we can tell if we're not being completely honest. So why did I choose this name? It all began with an old house and the eccentric folks who lived there...

Anyone who has met my parents understands that they are complicated, intriguing people. But they certainly aren't stodgy or boring. Yes, Dad can go on for hours about glacial movement and erosion, or Manifest Destiny , or even the defining characteristics of fabrics. And yes, Mom deals with insurance. Yet they collectively have a charm about them that allows for knee-jerk understanding on the part of us all when they do things we otherwise might find odd, even crazy.

Case in point: The Advent of the Red Door

After finally being able to move the family to Livermore, CA and out of a rapidly decining area in Newark, CA, my folks were beside themselves with joy at the idea of owning their first house. And the house itself was perfect. Large and roomy, lots of wall space, a dining room that we ate in all of three times because the kitchen eating area was much more convenient, a big back yard with full-grown trees and a rose garden, an in-ground pool, a master suite. The list goes on.

The one drawback to the house was its being a "track home" (as almost ever house in Livermore is). My parents wanted some uniqueness, a touch of character in their first house. First they tackled the inside. The family room almost buckled under a deep outdoorsman theme. Wall-to-wall flyfishing paper, Wild Wings paintings, a creel and rod, dark green couches and, to top it all off, the head of a deer mounted above the brick fireplace (we named him Cal, by the way).

And so my mother moved her wallpapering frenzy methodically through the house, putting personal touches in each kid's room, the kitchen, the laundry room, bathrooms, hallways. But walking up to the big gray-blue house at the end of the typical suburban court, no one could tell our house from the zillions of others.

Dad bought the red paint with Mom's blessing. By noon the next day our front door, clearly visible from the street, was a vibrant tomato red. It shouted our originality into the neighborhood.

That's what gave me this idea. Because, after all, people were still getting to know me at the time. I was a sophomore in high school, defined by my place on the volleyball team, my participation in my honors English class, and the fact that I was "the girl who lives in the house with the red door". Simple.

Being the hopeless romantic that I am, I like to think that my association with the red door carried some sense of mystery. Who is she? Where is she from? What can she do? Perhaps I was extraordinary.

Now, though, the red door symbolizes so much more than that. Behind it lies my destiny, my path, my potential. Red is my favorite color because it seems to indicate life:

Blood running through veins, blushing in the face of flattery and pride, the sin of Adam and Eve, the nail polish I wore on my wedding day, the ribbons I wore during D.A.R.E. week when I was eleven years old, strawberries in the summertime, the bricks in stately old buildings, the cotton-rich earth of Tara , the flag flapping at an old bull to induce a charge, firetrucks, stoplights, roses given to me by Jonathan on Valentine's Day, Christmas, Disneyland, sticking my tongue out at my little brother behind my dad's back, ketchup on hot dogs and the reason Hester Prynne was forced to wear the letter A.

To junior prom I wore a beautiful red silk dress. From that moment on red became a color I was associated with by friends and family. I like it that way. When Jon and I were registering for gifts for the wedding, I carefully chose all red kitchen accessories. For some people red is terrifying, a step outside their comfort zones, too noticeable to be relaxing. But red soothes me.

And so I choose the red door as a symbol of the vivacity I hope to embody the rest of my life. I am many things, some of which I don't yet know of, let alone understand. But for now I will continue to be the girl behind the red door.